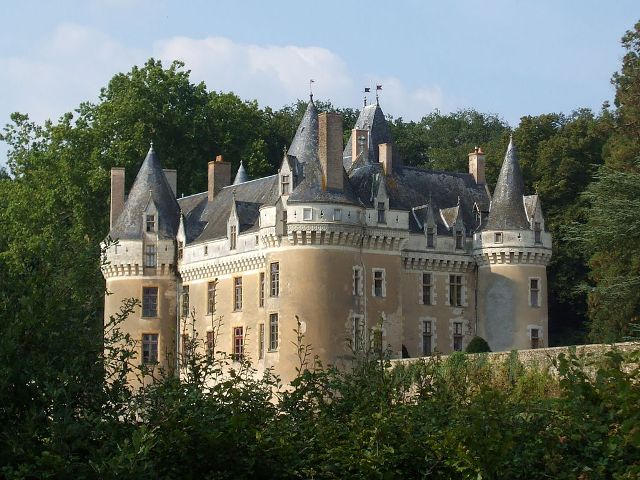 Location: Luché-Pringé, in the Sarthe departement of France (Pays de la Loire Region).
Built: 11th century.
Condition: In good condition.
Ownership / Access: --
Notes: Château de Gallerande is a castle in Pringe, in the municipality of Luche-Pringe, in the department of Sarthe. Private property, it is not possible to visit. Castle Gallerande was originally a fortress, built from the eleventh or twelfth century. In 1210, Robin II Clermont wife of the heir of Mr. Gallerande, thus founding family of Clermont-Gallerande which retains ownership until the Révolution2. Grugelin Guillaume, who had custody of the castle during the Hundred Years War, abandoned to the English in 1421. The castle is mentioned or six years later by the Constable of Richemont3. During the Renaissance, Louis I of Clermont-Gallerande, chamberlain of King Rene of Anjou, began the reconstruction of the castle which will be pursued by Louis II, his little son. The land is Gallerande erected in marquisate in 1576 in favor of George I of Clermont-Gallerande. During the Wars of Religion, Castle Gallerande is occupied by the leaguers. In 1822, Castle Gallerande is sold to the family of Sarcé, the last heiress, Anne of the board of Ruille, died in 1985, bequeathing the property to the Order of Malta, of which she was a member. Louvre Museum acquired a painting by Georges de La Tour, St Thomas Pike, kept in the castle for 32 million francs before the property was sold to a wealthy American. Gallerande Castle is located near the town of Pringé in the middle of a park at the foot of a hill that slopes down to the Loir. It consists of a main building and a wing back towards the rear, accompanied by four cylindrical towers and two square towers. The beds are separated from the road by a canal. Gallerande the field extends to the other side of the road, with the presence of two former body of the eighteenth century outbuildings to house the troops of the Marquis of Gallerande and a dove pierced with triangular openings.

How To Get To Château de Gallerande (Map):