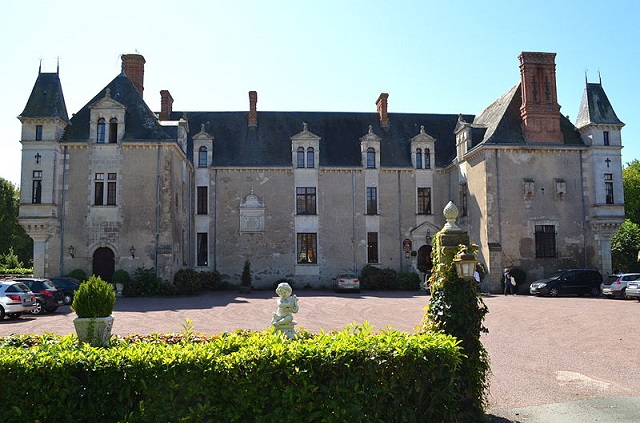 Location: Challans, in the Loire-Atlantique departement of France (Pays de la Loire Region).
Built: 9th century.
Condition: --.
Ownership / Access: --.
Notes: The Château de la Vérie, also called "Logis de la Vérie", is a building located in the commune of Challans, in the department of Vendée, in Pays-de-la-Loire region.The origins of the castle date back to the ninth century, before being erected as a fortified castle against the risk of Norman and Scandinavian invasions. In 1130, the building passes under the tutelage of the Templars established at Coudrie. At the beginning of the fourteenth century, Jehan Belleron was lord of the Viere. The estate then passes to the Frondebœuf family, of which a daughter, Agnes, marries and brings the Vire in 1400 to the knight Guillaume du Plantis, lord of La Guyonnière. Claude du Plantis sold the residence at the end of the sixteenth century to André Bouhier, treasurer of King Henri IV. André Bouhier has rebuilt the Vérie by taking inspiration from the Château de Beaumarchais in Bretignolles, owned by his brother Vincent Bouhier of L'Écluse. Françoise-Catherine Bouhier, the last descendant of the fourth generation owner of La Vérie, married Claude-Gilbert Robert of La Salle-Lézardière, Lord of Poiroux in 1724. Twelve children will be born of this union, of which the eldest, Louis-Jacques-Gilbert Robert of Lézardière, will inherit the Vérie. He married Marie-Jeanne-Charlotte Babaud de La Chaussade in 1748, where fifteen children were born, including Pauline de Lézardière and Jacques-Augustin Robert de Lézardière (deacon who died as a martyr during the Revolution, beatified by Pius XI in 1926 , A stela is built in his memory near the castle). Baron de la Lézardière being accused in 1791 of instigating a conspiracy against the Republic ("plot de la Proustière"), he saw his castle burnt down, a tower of which was completely destroyed in the south-west. Second turn threatening ruin had to be demolished in 1848). The following year, the Château de la Vérie was placed under sequestration until it was raised in 1801. In 1805 the Lézardières sold the estate to François-Armand Boux de Casson, a former lieutenant of Charette's army. Ludovic and Olivier Boux de Casson, who were born at la Vérie, will become mayors of Challans. François Boux de Casson (1908-1981), former deputy was the owner. The facades and roofs of the castle are inscribed as historic monuments in 1964.

How To Get To Château de la Vérie (Map):