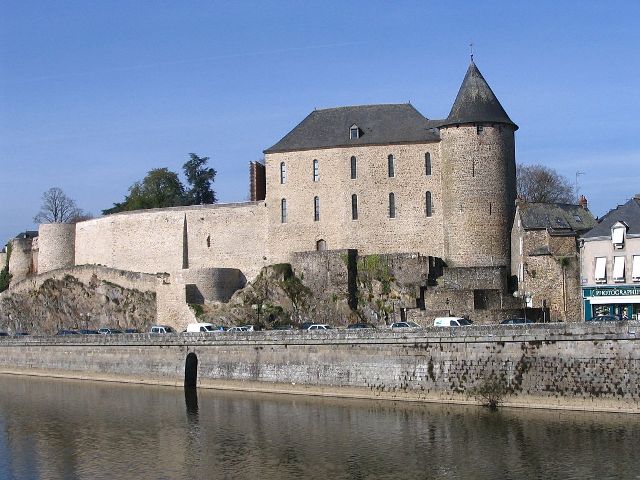 Location: Mayenne, in the Mayenne departement of France (Pays de la Loire Region).
Built: 11th-16th century.
Condition: In good condition.
Ownership / Access: Owned by the Department.
ISMH Reference Number: PA00109558
Notes: Château de Mayenne is a medieval fortress located in the department of Mayenne and in the town of Mayenne. The castle was established in the tenth century, under the reign of Charles the Simple. It lies on the Brittany Marches and, like the castle of Laval, he was responsible for defending the Maine face Brittany, Anjou and Normandy. He did so against the Fougeres Breton castle. The castle was originally a Carolingian palace. It has been refurbished several times during the Middle Ages, before becoming a prison in the eighteenth century. He eventually bought by the town of Mayenne in 1936. When major refurbishments in 1993, Carolingian remains are unearthed. This discovery gives value to the castle because civil or military buildings preserved Carolingian are extremely rare. The site is declared archaeological site of national interest. Important excavations are conducted, and the castle became a museum. This castle is the subject of a registration as a historic monument since November 19, 1927.