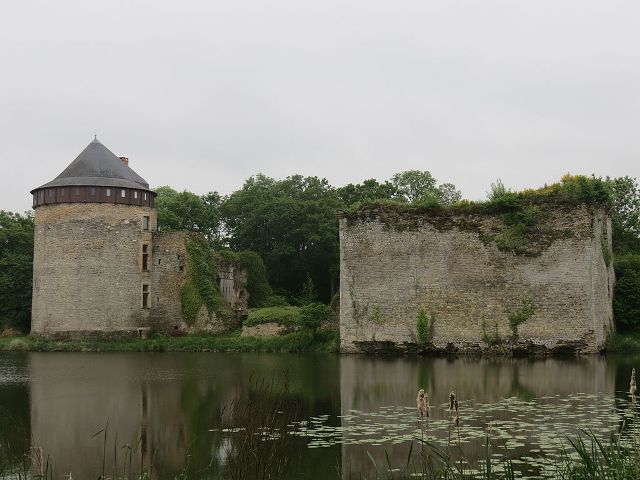 Location: Montjean, in the Mayenne departement of France (Pays de la Loire Region).
Built: 12th century.
Condition: Ruins.
Ownership / Access: --
Notes: Château de Montjean is a castle in ruins located near a pond in Montjean in the department of Mayenne. It is located 2.5 kilometers east of the town. Castle Montjean was the sixteenth century an important role defending the royalist Laval County against bands Mercœur and the Leaguers of Anjou. Located four miles from Laval, on the borders of Brittany, it was rebuilt by André of Lohéac, after the Campaign of Brittany and Normandy in 1448-1449.Its majestic ruins, the grandeur of its walls, vast gaps still give today the extent of its importance. For the abbot Angot, in the early twentieth century, the space enclosed by the pond and moat more than half a hectare, entirely occupied by the walls flanked with strong towers. The opposite side to the pond no longer a shapeless mass of rubble, all that party for a century, been operating as a career. To the floor of the pond, ditches were twofold.

How To Get To Château de Montjean (Map):