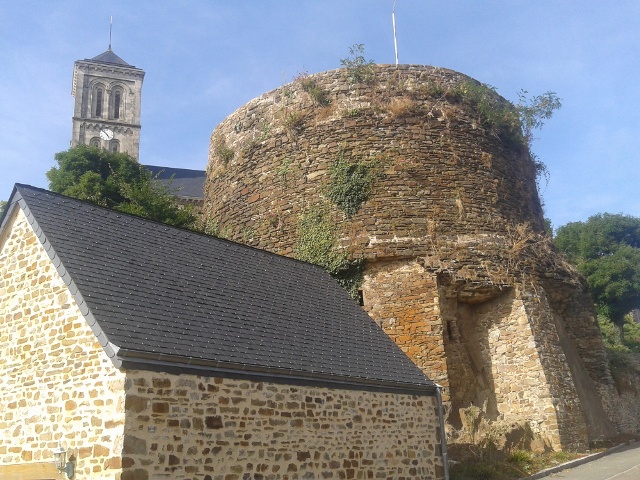 Location: Montsûrs, in the Mayenne departement of France (Pays de la Loire Region).
Built: 19th century.
Condition: Ruins.
Ownership / Access: --
Notes: Château de Montsûrs was located Montsûrs Montsûrs castle. There are two towers of the castle where Lohéac André was born Joan of Arc's companion. The castle was located on natural escarpments reinforced by deep moat fed by the Jouanne and Vesnard. The city of Montsûrs was one of ten castellanies Laval County. It is seen by the ruins which still existed in the nineteenth century that this castle may have 12 to 1500 meter circuit. He was flanked by several towers with bastions, and had a drawbridge and moat wide and very deep.The tower Renaise called "Paradise Biques to" the subject of a registration under the Historic Monuments since June 9, 1925. In 1374, Bertrand du Guesclin married Jeanne de Laval. Castle Montsûrs is therefore his home, and there lies in periods outside the war. It will deal with the marriage of his niece Mary of Orange, Jean, Vicomte de Vendôme.During the Hundred Years War in 1429, the Castle of Montsûrs is under siege in an attack of English as the Lords of Laval follow the army of King Charles VII. The English, under the command of the Earl of Arundel, Lieutenant General of King Henry VI, after several successive assaults take Castle Montsûrs who plundered; Arundel, seeing that he could not keep it long because he had to join the army of the Duke of Bedford, ordered the fire. The occupation of Laval County by the English continued until 1449.With its powerful army, Louis XI in conflict with John II of Valois, passed by Montsurs; but it did not stop there. The king, leaving Laval, took refuge in the Abbey of Roe in the month of September 1472 as his army was before the Huguenot. In the early nineteenth century, the remains of five towers and castle were still visible. They currently remain two towers: the tower called "the Fuie" and Renaise Tour. The rest is totally destroyed between 1833 and 1855 for the construction of the parish church of Montsûrs.