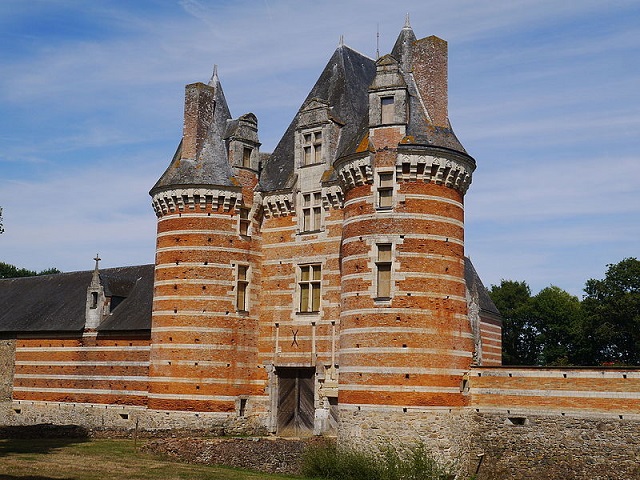 Location: Saint-Quentin-les-Anges, in the Loire-Atlantique departement of France (Pays de la Loire Region).
Built: --.
Condition: --.
Ownership / Access: Private company.
Notes: The castle of Mortiercrolles in Saint-Quentin-les-Anges in Mayenne is a Louis XII1 style building located 1 km south-east of the village.The entire building is classified as historic monuments in 1924.The castle was rebuilt in the last years of the fifteenth century by Pierre de Rohan, Maréchal de Gié. If we compare it to the ruins of the castle of Montjean, we understand that from 1460 to 1500 peace had been ensured in France. His style Louis XII is characteristic of this period of transition between Gothic art and the First Renaissance5. In general, the structure remains French, only the scenery changes and becomes Italian. The choice and arrangement of the materials, the alternating layers of tuffeau and bricks, the wide openings rising to the top of the roofs, thanks to the acute pediments of the dormers, the ravens of machicolations gracefully hollowed out and decorated with fine sculptures , Gracefully replaced the heavy masses that 50 years earlier had claimed to resist the artillery still in its infancy. The enclosure, beyond the large moat which protects it, had at its corners four towers with corbelled trunnions. The châtelet especially is well preserved and elegant. The chapel, with its walls chipped but still solid and of such a decorative effect thanks to the alternation of its white and brown seats. Abbot Angot points out that the castle itself, with its covered porch and windows with crossed mullions but without ornaments, seems to have been sacrificed to accessories and has much less artistic cachet. Without being comparable to the other residences created by Maréchal de Gié, the Verger remains "more than royal", writes Celestin Port, and the Motte-Glain - Mortiercrolles is still an architectural work worthy of study and preservation, typical of a An intermediate period between Gothic and Renaissance art.Châtellenie erected with that of the Hôtellerie de Flée in barony around 1500 by Louis XII, according to a memoir of the eighteenth century, although the title of barony was only met in the middle of the seventeenth century. Châtelais, Saint-Quentin, Mée, Le Bourgneuf, was also part of it. It belonged to the king by the duchy of Anjou. In the domain, the three ponds of the mound, Pâtis, Daviet, with wheat mill; "A beautiful and notable touch of great boys, which is worthy to Mgr. For the government of his hostel, and for pesson as to the year of glan; Several plains, willows, meurgrains with connoises and lively worms, defensible of all people, of which Mgr will certainly take great quantity of congenes without in any way encumbering the worm; Deffais in the river of Oudon from the ford of the Cheverie, to the coing of the boys of Saint-Julien (de Chatelais); Right of use in the forest of Flee and to run to the bushes bestes after the people of Bishop d'Allencon have run a foiz, and can stretch its cordaiges in a place called the Gray, "1415. Among the royalties one can mention: the three wine jalons and the three quarters of a denier, the wheat worth 12 sols the septier, which the prior of Châtelais had to carry to All Saints' Day, Christmas and Easter by a valet who Not restocked, and if it is restored, the restoration must be dismounted from the wrecks; The pelorre that the newly-married youngsters in the bourgeoisie of Bourgneuf de Saint-Quetin and the Vignes must run by three foiz when it pleases Mgr to let them know, from the escu de Mortiercrolle to the next plank as we go In Saint-Quentin; The song that the wife of the newly groom owes; The quintaine due by the other subjects out of bourgeoisie, except those of the Bois who are to furnish and keep in the state the escu in which the quintaine is fervent, and to put the spur on the priest. The lord gave each of them a jallaie of wine, which was to be drunk and pondered on the spot. He was entitled for 40 days and 40 nights, from Madeline's eve, to Saint Jehan de Collaice (August 29), to sell wine before any other in the town of Bourgneuf and elsewhere in its nuesse and put in the rock of The oustel Oudin so much wine as it will please him to sell, 1415.

How To Get To Château de Mortiercrolles (Map):