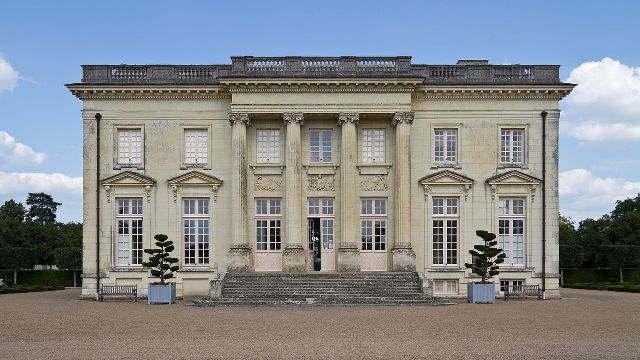 Location: Saint-Barthélemy-d'Anjou, in the Maine-et-Loire departement of France (Pays de la Loire Region).
Built: 18th century.
Condition: In good condition.
Ownership / Access: Owned by the municipality.
ISMH Reference Number: PA00109254
Notes: Château de Pignerolle is a field belonging to the Metropolitan Angers Loire Métropole, located in the municipality of Saint-Barthélemy d'Anjou, in the French department of Maine-et-Loire. At the heart of an area of ​​80 ha, Pignerolle Castle was built in 1776, the eve of the Revolution, to the Director of the Riding Academy of Angers, Marcel April Pignerolle, esquire of the king, Lord Pignerolle and director of the Angers riding academy. This castle was designed by architect Michel Bardoul of Bigottière modeled on the Petit Trianon at Versailles. It is neo-classical style. The rectangular façade, 25 meters by 17, has seven bays topped by pediments and four columns. On 1 September 1939, Germany invaded Poland. On 2 September, the 125th Infantry Regiment and the Polish General Staff moved to Pignerolle and the Polish Government in exile settled in various luxury hotels Angers. Angers and Saint-Barthélemy d'Anjou become jointly capital of Poland and it resistant to June 1940. Since then, strong ties bind Anjou and Poland, hence the creation of an association of trade and cooperation between Saint-Barthélemy d'Anjou and the town of Gabin Poland, which resulted in a young Polish visit. In 1943 the German Navy requisitioned Castle Pignerolle location for its communications center. Six hundred workers will build eleven bunkers and barracks for nearly a thousand German sailors. The Germans left the scene in 1944, leaving behind a devastated park and blockhouses on fire. In 1946, the German barracks allow 1000 people whose homes were destroyed during the war, to temporarily find a home. A real life is organized with a school, a police station ... The orangery houses the church of the city and the bunkers serve as hiding places for children. Historical monument the area visited National Defence by its last owners in 1964. In 1971, the urban district of Angers acquires the domain Pignerolle3 and began to restore it. The work, staggered between 1971 and 1998 and funded, cost more than nine million francs for the castle, and over two million in the annexes. The field is Pignerolle, with its castle, its reception room and orangery historical monuments, one of the largest and most beautiful parks in the Angers area. Its French gardens surround the castle surrounded by a vast English garden with ancient trees, walkways hydrangeas, play areas for children and picnic areas.

How To Get To Château de Pignerolle (Map):