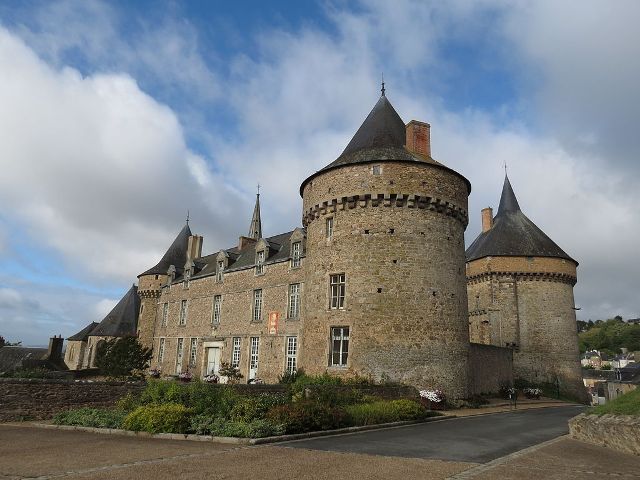 Location: Sillé-le-Guillaume, in the Sarthe departement of France (Pays de la Loire Region).
Built: 11th-17th century.
Condition: In good condition.
Ownership / Access: Owned by the municipality.
ISMH Reference Number: PA00109970
Notes: Château de Sillé-le-Guillaume is located in the town of Sillé-le-Guillaume in the Sarthe. The castle is located on a hillside in the center of town, next to the church. It overlooks the valley below and a view of the hills southeast. The castle has four towers, a dungeon imposing size and a house. The castle was the residence of Baron Sillé-le-Guillaume, one of the ancient baronies of Maine. The strong original castle was built in the eleventh century. The stronghold, being close to Brittany and Normandy, has been the scene of many battles, the assaults of William the Conqueror or the English army during the Hundred Years War. It will be taken and retaken several times by each party. Damaged, it is reinforced in the fifteenth century by Baron but the arrival of gunpowder will make this unnecessary restoration. In the sixteenth and seventeenth century it is made more habitable by its occupants. The castle served as a school during the nineteenth century before being acquired by the municipality.

How To Get To Château de Sillé-le-Guillaume (Map):