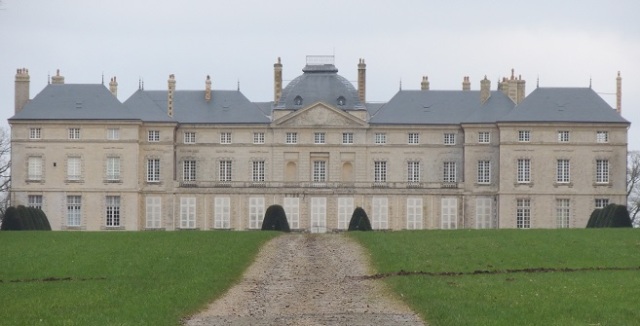 Location: Saint-Symphorien, in the Sarthe departement of France (Pays de la Loire Region).
Built: 17th century.
Condition: In good condition.
Ownership / Access: Privately owned.
ISMH Reference Number: PA00109961
Notes: Château de Sourches is a French château in the neoclassical style located in the municipality of Saint-Symphorien near Le Mans in the department of Sarthe and the Pays de la Loire. It was built between 1761 and 1786 by the architect of King Gabriel Lestrade with the help of the architect Jean-François Le Mans Pradrel for Louis II Bouchet Sourches, Marquis of Sourches, Count of Montsoreau, Provost Marshal France, captain of the King. After belonging to the Marquise de Tourzel, daughter of the Marquis of Sourches, governess to the children of France from July 1789, which took part in the flight to Varennes and was detained in August 1792, the Tower of the Temple with the royal family during the French Revolution, the castle was handed down to the house of Perusse des Cars in 1845. The facades and roofs of the castle and its courtyard, moat and chapel are the subject of a classification as historical monuments since April 11, 1947.

How To Get To Château de Sourches (Map):