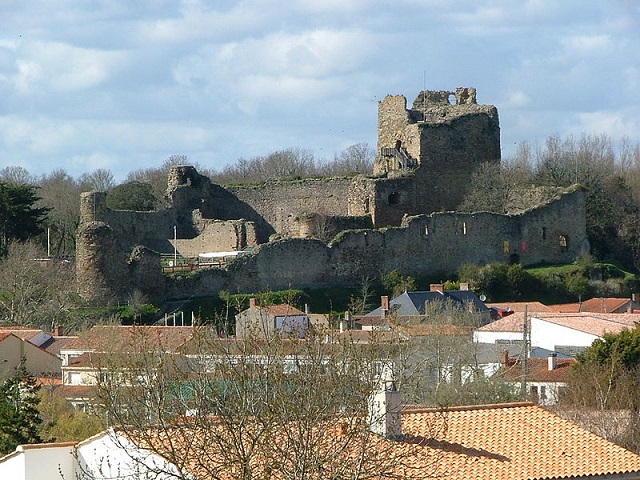 Location: Talmont-Saint-Hilaire, in the Loire-Atlantique departement of France (Pays de la Loire Region).
Built: 11th century.
Condition: --.
Ownership / Access: Guillaume le Chauve.
Notes: The castle of Talmont is a medieval castle in ruins which is in the town of Talmont-Saint-Hilaire, in the department of Vendée.The first fortifications date from 1025 under the order of William the Bald, Lord of Talmont. It would have built a caste motte, which still exists in the form of a small hill overgrown with trees, visible in a garden street of the Abbey. In 1050 he no doubt judged this mound insufficient and on the site of a ruined church dedicated to Saint Pierre, located a little further south, he decided to build a stone castle, probably one of the first in the Vendée. It has no more or less guarded than the part belltower and porch of the church, which forms a square tower, in order to make a dungeon and added a wall of stones closing a small courtyard. He flanked the tower of a stair tower and added a building leaning against the north wall. About 1170, Richard Cœur de Lion asked the lord of Talmont, his friend Raoul III de Mauléon, to perfect the fortress. Thus, a new enclosure flanked by several round towers doubles that of the eleventh century, an entrance châtelet imbricated in this enclosure is built to the north, a small enclosure isolates the dungeon inside the original courtyard, the keep is reinforced by A spur-wall to the north and a guard tower with a stunner and a bent entrance allows access to the courtyard of the dungeon.

How To Get To Château de Talmont (Map):