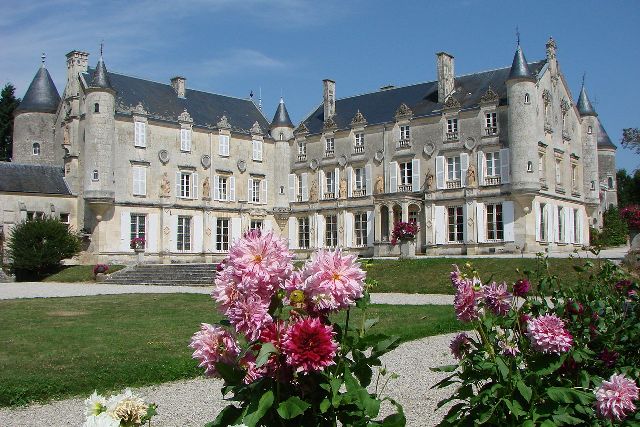 Location: Fontenay-le-Comte, in the Vendée departement of France (Pays de la Loire Region).
Built: 16th-19th century.
Condition: In good condition.
Ownership / Access: Privately owned.
ISMH Reference Number: PA00110097
Notes: Château de Terre-Neuve is a Renaissance castle located in Fontenay-le-Comte. He is the witness of economic and intellectual influence of Lower Poitou. A portrait of Rochebrune, etching on paper by Paul Baudry Vendée artistic glory of the second moist nineteenth century, was included in 2012 in the exhibition Hidden Treasures of graphic arts firm XIX the Museum of Fine Arts Nantes (Oratory chapel). The recorder is represented among other works in the workshop entitled Gates of Newfoundland that shows in the foreground a part of its rich collection of furniture and antiques, and he in his studio at his press (print dated October 15, 1862, framed by Wandeberg brothers in Paris. - archives pers). His daughter and heiress of William Elizabeth Rochebrune wife of Count Raoul Poignand Fontenioux; their descendants have preserved live the old house, open to visitors. The building consists of two buildings "angled", each end of the bracket being flanked bartizans. The building opens onto a terrace complete with a staircase leading to the park. The facades and roofs were listed on the Inventory of Historical Monuments by order of 13 December 1978. The porch (copied to the Castle of Saint-Cyr-en-Talmondais) before the main entrance was historical monument by decree of 13 December 1978, and the building containing the lantern of the staircase from the castle of Coulonges-on -l'Autize, the large living room and wood paneling adorned with a radiating sun, from the château de Chambord, the lounge, the lobby and the former studio of Rochebrune. Various elements are worth noting: a pediment used as decoration during the first of the Bourgeois Gentilhomme in Chambord in the presence of Louis XIV, the door's study of Francis I, the coffered ceilings and a fireplace decorated with alchemical symbols that summarize the major presiding phases to achieve the philosopher's stone from the Chateau Renaissance Coulonges-sur-l'Autize. Above the alchemical symbols is the inscription "Nascendo quotidie Morimur" (Seneca [ref. To be confirmed]). The castle is open to the public from May 1 to September 30, daily from 9 am to 12 pm and from 14 am to 19 pm.

How To Get To Château de Terre-Neuve (Map):