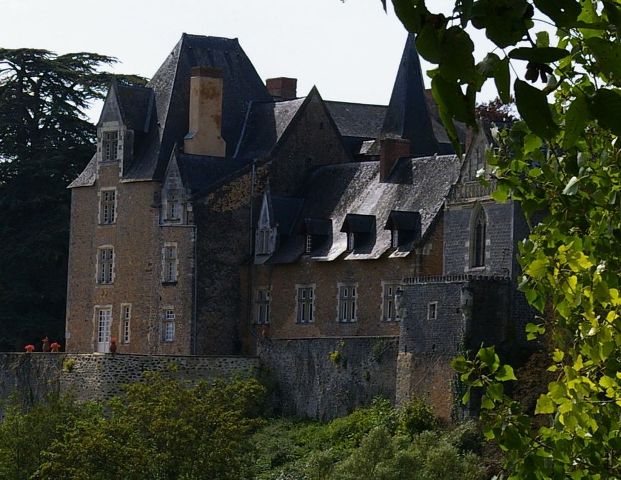 Location: Cheméré-le-Roi, in the Mayenne departement of France (Pays de la Loire Region).
Built: 16th century.
Condition: In good condition.
Ownership / Access: --
Notes: Château de Thévalles is located Thévalles Chémeré-le-Roi in the department of Mayenne, at 1500 m from the village, above the Erve. It dominates the course of the Erve and its valley from atop a carved rock to peak and Thévalles The mill was rebuilt in 1850, situated below the castle.The present castle rests on the foundations of a building built in the eleventh century against the invasions of the Normans. Part of modern buildings dating back to the sixteenth century and the other in the seventeenth century. In 1415, the site is referred to simply as an accommodation. In 1428, according to some authors it is besieged by the English headed by John Talbot. When in 1852 began the road from Laval to Brûlon by opening a trench near the castle was discovered many bones regarded as those of British soldiers killed in the combat1. In 1495, the land includes accommodation, a mansion, a house. February 6, 1558, an act of acquiring the land Thévalles mention the newly reconstructed castle.There remain two crenellated towers built in the fifteenth century. The walls and wide ditches formed with these towers the complete defense of this castle. Apart from this line on the old ditches filled today extends a beautiful English garden. At the entrance to the driveway of the castle was once an old building named Maladrerie. In the nineteenth century, an elegant Gothic chapel was built at the castle gate.

How To Get To Château de Thévalles (Map):