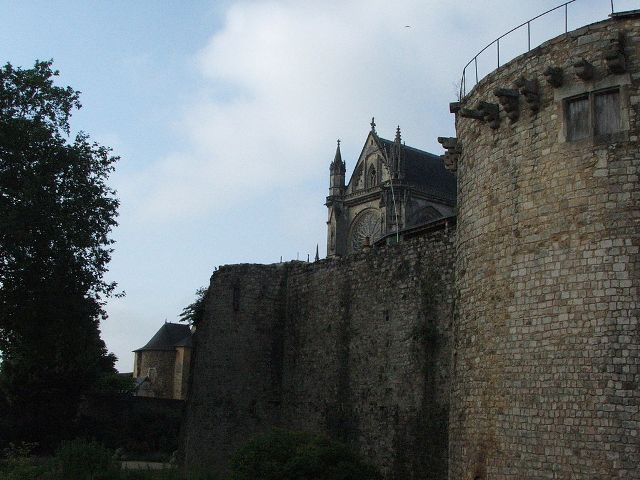 Location: Le Mans, in the Sarthe departement of France (Pays de la Loire Region).
Built: 10th century.
Condition: Ruined.
Ownership / Access: Owned by the municipality.
Notes: Château du Mans means a now defunct tower, located outside the Gallo-Roman city of Le Mans. It was built by William the Conqueror, Duke of Normandy, in the eleventh century. Its history was linked for centuries to that of the Saint-Julien Cathedral and that of the bishops, whose buildings were contiguous with it. The castle was built by William the Conqueror himself, to consolidate his power over the city, whose inhabitants were known to be more protesters. It was in 1063, just after his conquest, that William the Conqueror decided to build in two phases, a building can not only contain the Le Mans, but also protect the northern entrance of the city, extremely vulnerable. First, and at first because he has little time to dwell in the city, he built a high tower called Tower Orbrindelle. This tower, also called Grosse turn was based on the Roman wall north, become decrepit with time. It was built by Norman common model. It will play an important role in the wars that occur in and around the city throughout the Middle Ages. The tower is located to the east of the cathedral and is even a large fortified camp. This camp, said entrenched camp of Mount Barbet, will remain only until 1138. The castle was then built from this primary round. The fat was preserved as a prison, and prisoners often crossed the city to go to the count's palace. The fortification system of the castle, including the completion of the defensive gate is around 1425, during the siege of the city. In 1475, the great tower does not have less than three drawbridges to protect it. Until the sixteenth century, the fortifications of the Bishopric (located south of the Cathedral) and the castle are very well maintained, which is a staggering expenditure by chapter of Le Mans. In February 1617, the Count of Auvergne goes himself to Le Mans to order the demolition of the castle. The excavated materials are sold to benefit the city or used to rebuild the holy places. For over twenty years, the field will become the largest career in the city. The stones are used for everything and anything. We find many used as building materials in the Hotel Dieu of Coëffort or in the count's palace. Today, the castle square, located behind the Place Saint-Michel and the cathedral remained intact and is kept so by a municipal service to remember the monumental building that sat at the north end of the old city since the eleventh century. The castle of Le Mans consisted of a five-storey tower whose top was adorned with battlements.