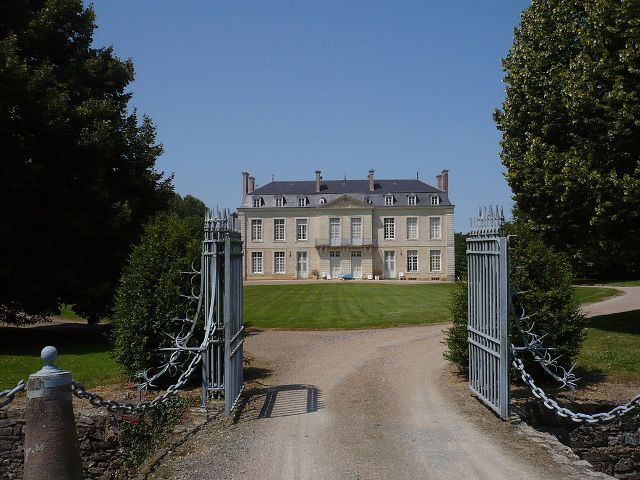 Location: Neuvy-en-Mauges, in the Maine-et-Loire departement of France (Pays de la Loire Region).
Built: 18th century.
Condition: In good condition.
Ownership / Access: Privately owned.
ISMH Reference Number: PA00109224
Notes: Château Le Lavouër a castle in Neuvy-en-Mauges, France. The castle is located in the French department of Maine-et-Loire, in the municipality of Neuvy-en-Mauges. The building is registered as historical monuments in 1969. The castle was not always the one we know today, but first a fortress located at a hundred meters of the current castle. The present castle was designed between 1770 and 1785 on plans drawn Versailles. It was the headquarters of the Vendean armies in 1793 under the leadership of Major General Jean-Nicolas Stofflet, who installed his offices. "Stofflet was the head of the parishes towards Maulévrier. He was Alsatian (sic), and had been a soldier. During the revolt, he was warden of the castle Maulévrier: he was forty years; he was tall and strong. The soldiers did not like him because he was hard and brutal; but they obeyed him better than anyone, and it made him very useful. The generals had great confidence in him; he was active, intelligent and brave. At the end of bad advisers took over his mind, is governed and inspired him pride, vanity that it was not natural, and that made him commit great mistakes and caused great harm to the party. Then it was, like everyone else, committed to do the best possible, without thinking of him. "- Donnissan Victory Rochejaquelein, Memoirs. A print shop, serving the cupboards was also installed there. At the end of the war, if not it will be stolen, said to have been hidden in a well. They found two centuries, characters shot in one of the farm wells, confirming the legend. However, a large amount of money at the time would have been hidden with the printing press, which has not resurfaced.

How To Get To Château Le Lavouër (Map):