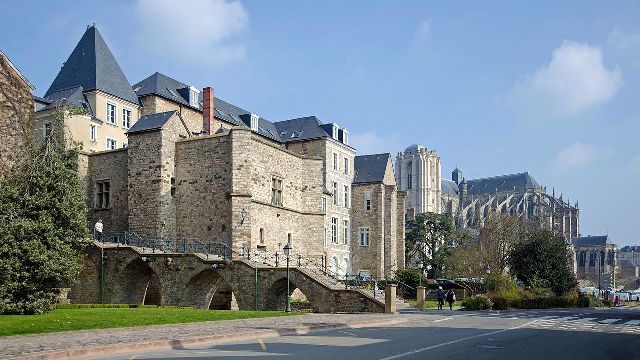 Location: Le Mans, in the Sarthe departement of France (Pays de la Loire Region).
Built: 12th-15th century.
Condition: In good condition.
Ownership / Access: Owned by the municipality.
ISMH Reference Number: PA00109801
Notes: Palais des comtes du Maine yet named Plantagenet royal palace is located in Le Mans at the heart of Plantagenet cited in the department of Sarthe in France. The building was built by Hugues between 1 970 and 1 015 against the Gallo-Roman wall. The counts of Maine Palace was the home of Geoffrey Plantagenet dynasty of the same name. This is why it is also called Royal Palace Plantagenet by the Tourist Office. It is located in Le Mans, in the heart of the medieval city of Old Mans. Today it is the seat of the town hall, the mayor's office is the room where was born Henry II, future king of England. The palace includes a palatine chapel became the collegiate Saint-Pierre-la-Cour. Bati instead of ancient Romans monuments, some elements have been the basis for its construction. The facades of the town hall were reworked and transformed in the late eighteenth century and during the interwar period. The large pillar from the first fortification (fourteenth and fifteenth centuries) is still visible in the Pierre de Ronsard gardens.