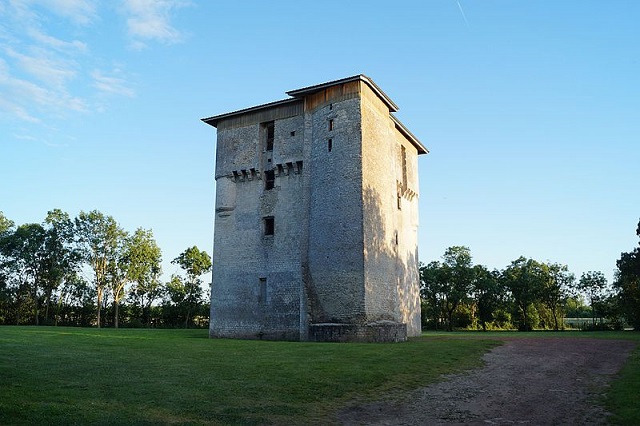 Location: Angles, in the Loire-Atlantique departement of France (Pays de la Loire Region).
Built: 1435.
Condition: --.
Ownership / Access: --.
Notes: The tower of Moricq is a vestige of medieval fortifications located near the small village of Moricq, in the commune of Angles, in the department of the Vendée and the Pays-de-la-Loire region. The building is classified as historic monuments.The existence of fortifications at Moricq is attested since 1090. A caste motte was built 250 meters from the current tower, the leftover remains form a pre oval located near the channel of the Bourrasses. A castle of masoned stone would have existed since the twelfth century. Its dungeon was to be located at the site of the current tower, because the Romanesque vaults of the basement suggest that the foundations are older than the tower of Moricq. This dungeon would have been cylindrical. The current building was rebuilt around 1435 by Régnault Girard, mayor of La Rochelle, who had acquired the castle in 1430. The tower of Moricq was built on an old caste castle and on the ruins of the original castle, whose Romanesque vaults in the basement still exist. Some "ancillary" buildings would have existed. Thus remains of stable were found behind the tower, a chapel would have existed to the north-west of Moricq, according to the map of Cassini, which locates this chapel in a line between a mill Moricq and the village of Moricq, Of Moricq than of the mill. Moreover, the place-dit of Moulin-de-Moricq most certainly alludes to one or more windmills that would have benefited from the force of the wind on this high point of Moricq. The chapel has never been found, but its foundations are surely still buried somewhere between the chemin des Motettes and the Moulin-de-Moricq road, according to the map of Cassini. It may still be the tombs of some lords of Moricq, and may be that of Regnault Girard. The building's function was to protect the port of Moricq, which was exporting wine, cereals and wood to La Rochelle and Bordeaux, as well as the mouth of the Lay which was then navigable to Mareuil. Another fortified castle located at the Guy in Lairoux made it possible to complete the surveillance of the mouth of the Lay. It was used by Protestants during the wars of religion (1565-1628). It was also used to imprison Protestants after the revocation of the edict of Nantes in 1685. Graffiti that have been noted, testify to this era. During the siege of La Rochelle in 1628, the large corner tower housing a spiral staircase would have been defeated. The neighboring marshes were desiccated in the eighteenth century, and the tower was then transformed into a granary, in connection with the activity of the port of Moricq. It remained active until the nineteenth century. The tower has been classified as historic monuments since 6 August 1915. The commune of Angles bought the building in 1988 to ensure its safeguard and restoration.

How To Get To Tour de Moricq (Map):