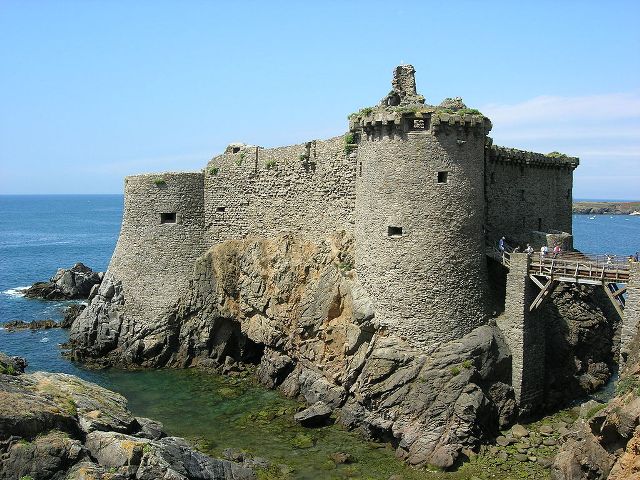 Location: L'Île d'Yeu, in the Vendée departement of France (Pays de la Loire Region).
Built: 14th century.
Condition: Ruins.
Ownership / Access: --
Notes: Vieux-Château (L'Île-d'Yeu), Old Castle, built in the fourteenth century, covers three centuries of island history. It is the subject of a classification as historical monuments since 1900. It Olivier IV of Clisson, great builder of castles, which began work in order to ensure Islais safety in case of foreign invasion . The longest was the one conducted by the famous English pirate Robert Knowles, who succeeded in 1355 to capture the castle and occupied the island for 37 years. In 1392, the island of Yeu will return to the English during the reconquest of Poitou by the Constable Olivier de Clisson. During the Renaissance, Jean V Rieux (master of the island) erected bastions of speakers around the castle. These fortifications were built models (as they did in their country) by Italian engineers that Francis had brought with him from his Italian wars. Later, Vauban resume in perfecting this military architecture to design his famous forts. This protection will be effective when in 1550 landed from the north, thousands of Spanish soldiers who defeated under the walls of the local garrison were forced to put to sea to return to the Iberian Peninsula. Old Castle, obsolete by the construction (between 1654 and 1660) of coastal forts small according to the technique of Vauban, was dismantled in the late seventeenth century, and many other ancient castles of the French coast, by order of Louis XIV fearing that they were not taken by the enemy to use them in strategic points. It is a listed building since 1890. In the 1970s, Maurice ESSEUL (from the island) is undertaking the excavation and restoration of the castle. He regularly gives lectures and organizes daily tours. Hergé would have inspired the Old Castle to draw one of The Black Island.