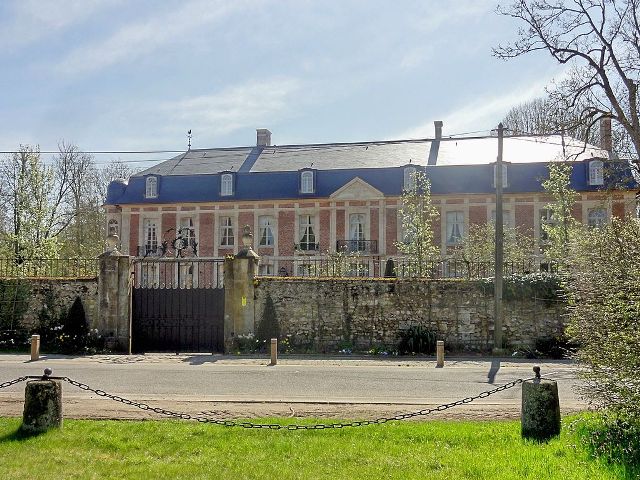 Location: Bailleul-sur-Thérain, in the Oise departement of France (Picardie Region).
Built: 12th century.
Condition: In good condition.
Ownership / Access: Owned by a private company.
ISMH Reference Number: PA00114492
Notes: Château de Bailleul-sur-Thérain is located in the village of the same name, in the department of Oise, France. The castle is the subject of a registration as a historic monument since April 19, 1961. The protected areas are the facades and roofs of the castle and common, and the gate.A first fort called "Fort Barbanson" was known since the ninth century. In 1212, the "high house" of Bailleul, erected in 1202, was besieged by the armed men of Philip of Dreux, bishop of Beauvais, grand-son of Louis VI the large. The siege lasted 13 days. The "high house" would have been visited by Louis IX (St. Louis) and his mother Blanche of Castile. The current castle, large and beautiful mansion was built in 1724. Parts of the long main body of the Castle of Bailleul and common (except the gate) are on the list of historical monuments. The towers that form the gate are likely imitations of the towers of the fifteenth century the castle of Langeais, along the Loire. From 1819 to 1837, the castle housed the Petit African Seminar fondépar the Reverend Mother Anne-Marie Javouhey. During almost nine centuries, only five families possessed the castle whose last, the illustrious family of Marquis Gaudechart now extinct family. February 11, 2012, fire engulfed the roof.