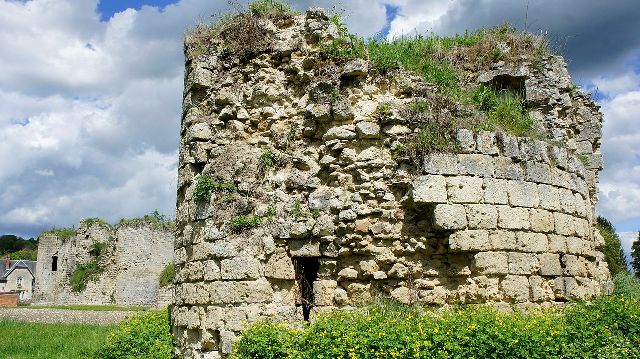 Location: Bazoches-sur-Vesles, in the Mayenne departement of France (Picardie Region).
Built: 13th century.
Condition: Ruins.
Ownership / Access: Privately owned.
ISMH Reference Number: PA00115520
Notes: Château de Bazoches-sur-Vesles is an ancient castle, the thirteenth century, the ruins stand in the town of Bazoches-sur-Vesles in the Aisne department in Nord-Pas-de-Calais Picardy . The castle is the subject of a partial registration under the Historic Monuments by order of 28 June 1927. Only enclosure remains registered.In 1232, the Bishop of Soissons, Jacques de Bazoches, receives tribute to Nicolas Bazoches. The castle is damaged in 1858, before being destroyed in 1918 during World War II.The Bazoches Castle is present in the twenty-first century, in the form of a trapezoidal enclosure constructed of limestone carefully dressed, flanked by round towers. There remains about three on the Western Front; with 6 meters in diameter that pierce high archers. All that remains of the old house a twin window of the thirteenth century, near the turn of northern corner, and vaulted cellars.