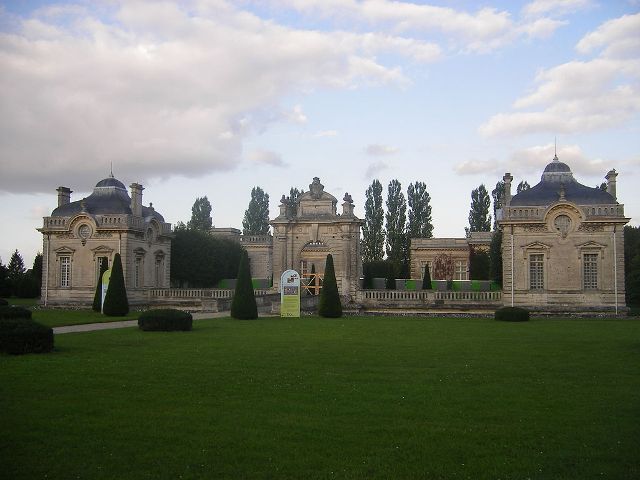 Location: Blérancourt, in the Mayenne departement of France (Picardie Region).
Built: 17th century.
Condition: In good condition.
Ownership / Access: Owned by the municipality.
ISMH Reference Number: PA00115536
Notes: Château de Blérancourt (former castle of the Dukes of Gesvres) is a castle located in a Blérancourt Aisne. It houses the Museum of Franco-American Blérancourt Castle, closed until 2016 for renovation.The castle, surrounded by moats, was built in stone, on plans by architect Salomon de Brosse from 1612 to 1619 to serve as the country residence to the family Potier de Gesvres. The central main building and two separate pavilions were built on an artificial terrace. The two pavilions heralded by their elegance, the "Folies" of the eighteenth century (small leisure vessels equipped in parks). One reached the castle by a bridge and a monumental gate. At the French Revolution, it was declared national property, the central main building was demolished. The decor elements and salvageable building materials were auctioned. Only stood up the big gate and two separate pavilions. During World War II, what was left of the castle was heavily damaged. From 1917, the remaining standing buildings sheltered the headquarters of the American Committee for Devastated Areas (CARD) at the instigation of a rich American, Anne Morgan. In 1918, the German offensive completed the destruction of the building. Anne Morgan bought the ruins in 1919. Reconstruction began in 1924 under the direction of architect Jean Trouvelot (1897-1985). From 1928 to 1930, a new building was built on the site of the old castle to house a museum. In 1938, the south pavilion, "flag of the willing", was rebuilt to house the memories of American volunteers of the Great War. What remains of the castle of Blérancourt now houses the Franco-American Museum of Blérancourt Castle surrounded by its park became the Gardens of the New World.

How To Get To Château de Blérancourt (Map):