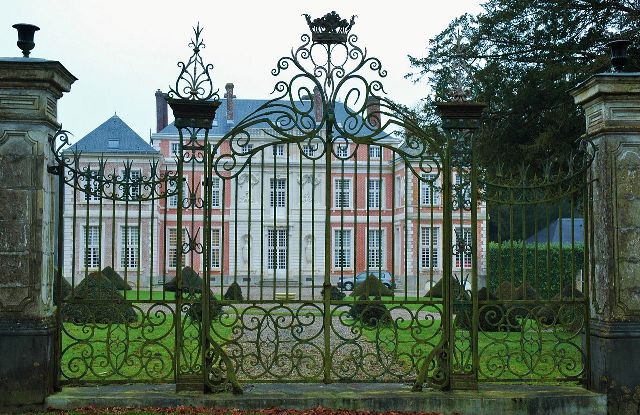 Location: Brailly-Cornehotte, in the Somme departement of France (Picardie Region).
Built: 1770-1775.
Condition: In good condition.
Ownership / Access: Privately owned.
ISMH Reference Number: PA00116108
Notes: Château de Brailly-Cornehotte is located in the eponymous town in the department of the Somme. It is partially registered as historical monuments by order of 9 July 1926 for the central motif of the facade.The building is constructed of brick and stone. The two sides are very different. Two wings surround the main building, higher. It is covered with a low-pitched roof. The front building central white stone is carved large Louis XVI motifs. In the park, a Chamber decorated with pilasters advances in the center of the facade. Inside there are beautiful sculptures attributed to Simon Pfaff Pfaffenhoffen, former Austrian officer and became a sculptor based in Abbeville, without some source.