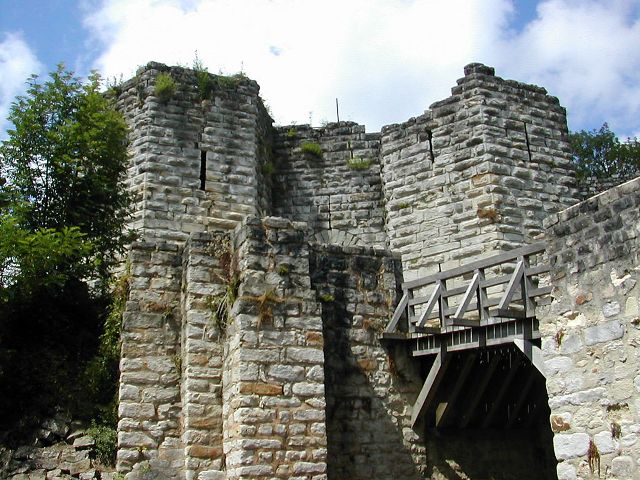 Location: Château-Thierry, in the Aisne departement of France (Picardie Region).
Built: 13th century.
Condition: Ruins.
Ownership / Access: Owned by the municipality.
ISMH Reference Number: PA00115584
Notes: Château de Château-Thierry is an ancient castle, founded in the twelfth century by the Counts of Champagne and rebuilt in the thirteenth century, the remains of which stand in the town of Chateau-Thierry in the Aisne department in Nord- Pas-de-Calais and Picardy. The ruins of the old castle and the hill on which they are located are the subject of a classification as historical monuments by order of 2 August 1932.First Gallic oppidum instead Merovingian and Carolingian, the castle housed the king lazy Thierry IV under the tutelage of Charles Martel. The Counts of Champagne in the ruins relevèrent the tenth and twelfth centuries. In 1105 Hugh I of Champagne incorporates the city in its own domain. Thibaud IV of Champagne there began after 1229 important work. In 1285 the castle was attached to the royal domain before that date the lords of Coucy were squires. In the early fifteenth century the castle was sold to Louis of Orleans. At his death he reverted to the crown. The walls were built gradually from the ninth to the seventeenth century, particularly by Count Thibaut IV of Blois. The fortress is set up to use the gun when the alterations occurred in the fifteenth and sixteenth century. From the early nineteenth century, the castle walls are shaved, leaving only the walls, the Porte Saint-Pierre, the Saint-Jean gate and the gate.

How To Get To Château de Château-Thierry (Map):