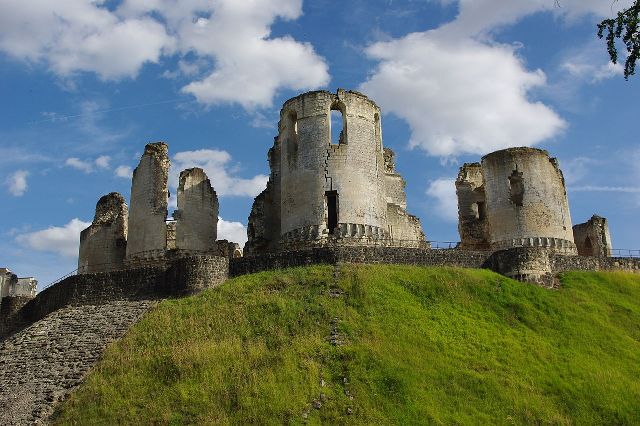 Location: Fère-en-Tardenois, in the Aisne departement of France (Picardie Region).
Built: 1206.
Condition: Ruins.
Ownership / Access: Owned by a private company.
ISMH Reference Number: PA00115670
Notes: Château de Fère-en-Tardenois is an ancient castle, built from the beginning of the thirteenth century, the ruins stand in the town of Fere-en-Tardenois in the Aisne department in Nord-Pas region de-Calais and Picardy. As historical monuments; the remains of the castle are subject to a ranking by the 1862 list; the yard of the castle, facades and roofs of all the buildings, pavilions and around the forecourt and the farmyard, including hotels, except the additions of the twentieth century , the ancient gate of the forecourt, southeast side, all the walls closing and retaining the front yard and backyard, all archaeological soil ahead -Courtyard and backyard are the subject of a registration by order of 19 April 1994.Around 958 Flodoard indicates that there is a strong way to Fere. La Fere land is acquired at the end of the twelfth century, the archbishops of Reims by Robert de Dreux, brother of King Louis VII of France. his son, Robert II, Count of Dreux and Braine starts raising the fortress from 1206; Construction will last until 1260. He belonged to the first house Valois Orleans, Valois-Angouleme. In 1528, Francis's mother offer the Constable Anne de Montmorency for his wedding. This made the turn, adding the large covered deck, attributed to the architect Jean Bullant. Crown confiscated after the execution of Henry II of Montmorency. He went soon after to Charlotte de Montmorency, wife of the Prince of Conde. He spends the younger branch of Conde, the princes of Conti, and later the Duke of Orleans, Philippe Equality father. This demolishes partly in 1779 and sells materials and furniture. His creditors seized the rest and sell it at auction in Paris in 1793.