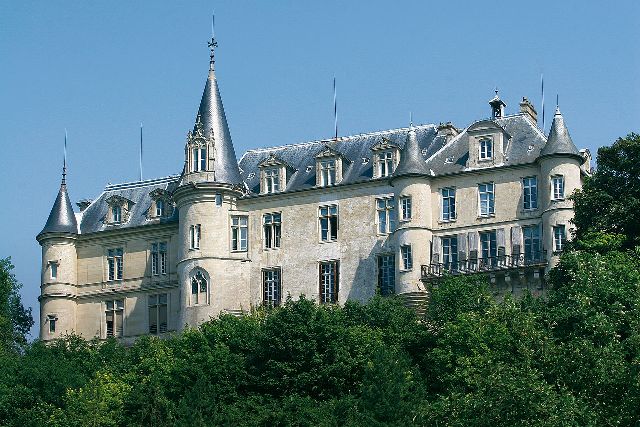 Location: Mello, in the Oise departement of France (Picardie Region).
Built: 15th century.
Condition: In good condition.
Ownership / Access: Privately owned.
ISMH Reference Number: PA00114742
Notes: Châteaux de Mello and Princess of French castles are the fifteenth century representing the "Grand Mello", located in the municipality of Mello in the department of Oise and Nord-Pas-de-Calais and Picardy region. They are both subject to registration as historical monuments since 1 February 1989.It is likely that any time there was a fortress Mello. This height where the view stretches far, a turning point in the field, a road node sufficient to explain it. Some believed recognize in the apparatus of the access bridge to the court the character of a Roman construction. In the Middle Ages, the castle was in the shape of a quadrangle flanked by two large towers of which only the base of one still exists. It was then a prison. Mello reported directly to the king because of Senlis which, historically, was part of the Royal Estate. The oldest of Lords, Barons de Mello, are mentioned in the charters of the eleventh century. The last heir of this house, Marguerite de Mello married in the fourteenth century, Jean de NEELLE, died in 1372. Family of NEELLE went out with Louise NEELLE who married Jean de Bruges, Lord of the Gruthuse2. It was she who rebuilt the south facade with four turrets corbelled and the west facade up to the tower of the Chapelle3. Their dead children before them, Louise NEELLE already a widow, gave Mello gift to his niece Humieres Charlotte who married Francis Montmorency4. Henry IV and Louis XIII stayed in Mello to hunt; we still hunting wolves in the woods under Louis XIII de Mello. Lord Herbert of Cherbury, British Ambassador says in his memoirs trips he made there for that purpose, invited by the Constable of Montmorency, owner of Mello until 17685. The chapel of the fortress was built by Charlotte-Marguerite de Montmorency3, Princess of Condé, in memory of his brother Henry II of Montmorency beheaded under Louis XIII in 1632. Mello remained property of the House of Montmorency, and until 1768 was restored to Andre-Claude Patu, son of the notary of Montmorency. At his death in 1798, it was acquired by Mr. Pillot 6qui sold it in 1819 to François Alexandre, Baron Seillière, great grandfather of Countess Bertrand Durfort7. Castle Princess was completed by Hippolyte Destailleur pupil of Eugène Viollet-le-Duc in 1871. It replaced an old castle in the days of Louis XV, very simple, with pediment clock. Since 2004, Mello Castles host business seminars.