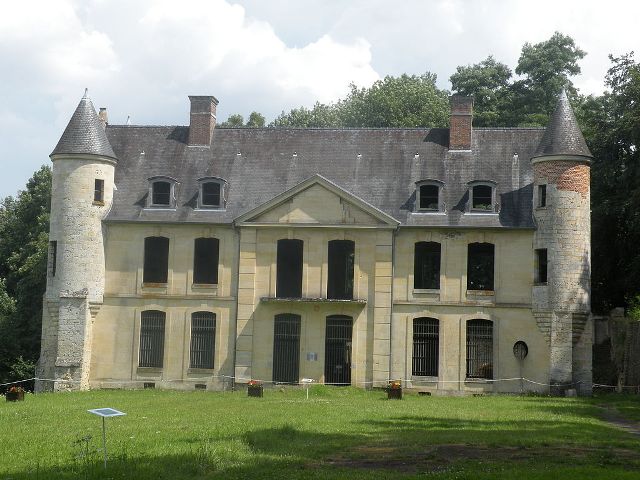 Location: Warluis, in the Oise departement of France (Picardie Region).
Built: 13th century.
Condition: In good condition.
Ownership / Access: Privately owned.
ISMH Reference Number: PA00114973
Notes: Château de Merlemont in the municipality of Warluis (Oise) in France. The building has an inscription with the historic buildings October 9, 1979 for its North gable with two corbelled turrets, the Southwest tower and vaulted room in the basement.The oldest references to the domain back to the twelfth century when the lord of Roscelin Merlemont inhabits the place called "Old Castel". A stone retaining wall two hundred meters long faces south of the castle. It changed hands a few times including Pierre Turgis of the fifteenth century and his son Louis Courtils. The domain has belonged to the same family. Louis 1 of Courtils is building the new home of the wing in 1530 is an additional wing to the northeastern tip. This is the Castle Merlemont qu'Odet Coligny, Bishop of Beauvais converted to Protestantism in 1561. Jean 1st of Courlils goes to war against the king and the castle was sacked by Catholics. In the seventeenth century and eighteenth century the castle was surrounded by dependence: common, laundry, mansion, dryer and a farm. The grand staircase wanted by jean courtils 3rd romantic style name dates from 1675. He made great development in the park including 8 alleys arbors, he set a courtyard south of the castle, extends the façade creates a dovecote and decorates the grand salon of beauvaisiennes tapestries. The castle suffered a fire around 1736. At the revolution, the family coat of arms on the pediment of the building is destroyed. The new wing of the house was replaced in 1858 by a classical wing of brick and stone. It was enlarged in the nineteenth century. It was severely damaged during the bombing on 25, June 27 and July 5, 1944 because the Germans of Flakregiment 155 led by Max Wachtel, occupied the premises. The west facade was rebuilt in 1965 in a neoclassical style. In 1965 a large conservation campaign is undertaken annually and in 1995 rehabilitation campaigns are implemented. In 1998 the wash below the castle is restored.

How To Get To Château de Merlemont (Map):