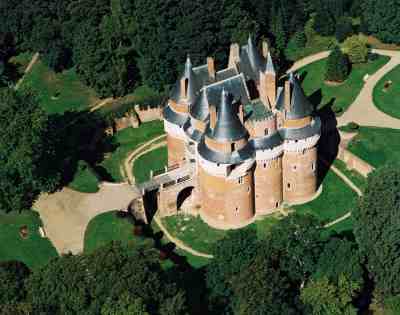 Location: Rambures, in the Somme departement of France (Picardie Region).
Built: 1421-1470.
Condition: In good condition.
Ownership / Access: Privately owned.
ISMH Reference Number: PA00116225
Notes: Château de Rambures is a former castle of the fifteenth century, dismantled in the seventeenth century and restored in the eighteenth century, which stands on the town of Rambures in the Somme department in Nord-Pas-de-Calais and Picardy region. This is one of the few medieval castles to exist in the department. In the original plan, it is also a masterpiece of late medieval military architecture. As historical monuments; the castle is the subject of a classification by order of 23 February 1927; facades and roofs common, the park, with its paths, jump-ha of the entrance with the gates and rows of trees from the road Oisemont in Rambures, facades and roofs of chapel in the park; facades and roofs of the stake is subject to registration by order of 17 June 2003.The land of Rambures was transmitted by inheritance and marriage since the eleventh century. The succession of owners is as follows.