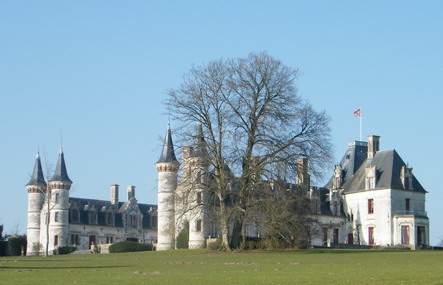 Location: Regnière-Ecluse, in the Somme departement of France (Picardie Region).
Built: 1030.
Condition: In good condition.
Ownership / Access: Private property.
ISMH Reference Number: PA00116226
Notes: Château de Regnière-Écluse is a building component with a large park, a hunting reserve and a model farm of the estate of Count Hinnisdal. The project is located in Picardy maritime, northwest of the Somme, in the communes of Regnière-Lock, and Vron Machy.Since its acquisition in 1030 to the same family retained ownership of all original, for nearly a millennium. The 1553 years is engraved on the stone fireplace in the library. Tyrel succeeding to the Soissons-Moreuil, or the Soyécourt inherit all. In the nineteenth century, Herman, Count of Hinnisdal, owner, landscape the park and castle in their current form. Achieving this neo-gothic whole is entrusted to architect Jean Herbault. A model farm (in the towns of Regnière-Lock and Machy), an English garden is created and two game parks in the towns of Regnière-Lock and Vron; they constitute a rare creation to the nineteenth century. The British army occupied the area during the First World War. During World War II, the buildings were requisitioned by the Germans who made a hospital. Neglected, they then served as venue for summer camps. In 1961, the descendants of the former owners restore all which will then be acquired by the Conservatoire du Littoral. The facades and roofs, as well as the landscaped grounds are the subject of a registration as historical monuments by order of 29 July 1976. The model farm is listed by order of 27 April 2005. The whole area is classified as historical monuments, ranked by order of 20 June 2006. This protection concerns the castle, the keeper's house, the lawn outside the castle and landscaped park, the forests of the Great Sale, of Chelle, Vron, the Periot Franc Picard, of Queneaux and Soyécourt, agricultural parcels of the Great Room, the Grand Patis and Glassware. The family continues to live in the building. The management and maintenance are provided by the association for the preservation and enhancement of the millennium field Regnière-Lock.

How To Get To Château de Regnière-Écluse (Map):