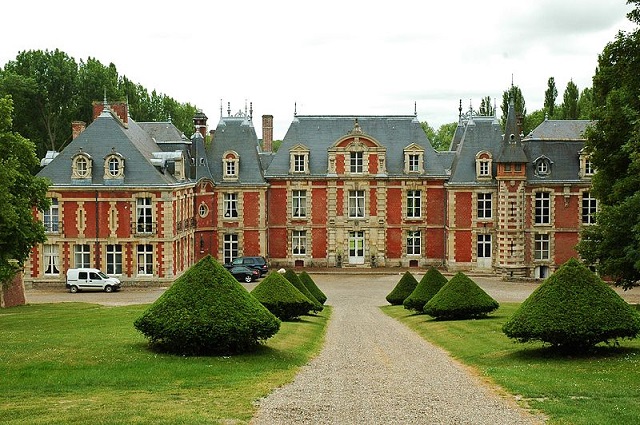 Location: Suzanne, in the Somme departement of France (Picardie Region).
Built: 1619 - 1625.
Condition: --.
Ownership / Access: Private person.
Notes: The Suzanne Castle is a private property located in Suzanne in the department of the Somme, between Amiens and Péronne.Georges de Valpergue, Lord of Suzanne by his marriage with Francoise de La Pierre, lord of Suzanne had the present castle built in 1619 on a terrace overlooking the lakes of the Somme. The castle of Suzanne entered the family of Estourmel by the marriage of the daughter of Georges de Valpergue, Louise de Valpergue, with Louis I of Estourmel in 1625. Louis II, marquis of Estourrnel, had the two wings added to the End of the seventeenth century.The Duthoit brothers made two drawings of Suzanne Castle: one representing the entrance and the other a window on the south façade. The castle was restored from 1855 to 1861, then after the Great War.The castle is protected as a historical monument: classification by order of 29 August 1984 for certain parts and registration by order of 29 August 1984 for others,

How To Get To Château de Suzanne (Map):