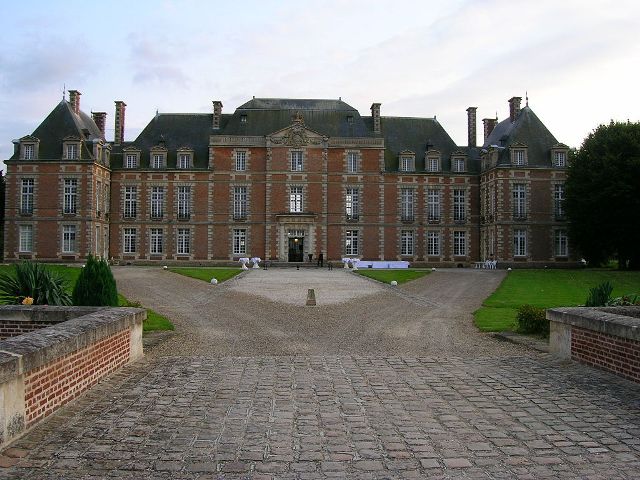 Location: Tilloloy, in the Somme departement of France (Picardie Region).
Built: 17th-20th century.
Condition: In good condition.
Ownership / Access: Privately owned.
ISMH Reference Number: PA00116284
Notes: Château de Tilloloy is located in the municipality of Tilloloy, 7 km south of Roye in the Somme. The castle and park are classified as historic monuments. Castle of Tilloloy is private property.Castle Tilloloy has the feature, like the castles of Bertangles, Bussy-lès-Poix and Regnière-Lock, never having been sold and have remained in the same family. In the fourteenth century, the manor was under the lordship of Nesle and belonged to the John Fay. She spent the Soyécourt the sixteenth through the marriage of Antoinette de Rasse (to whom we owe the construction of the present church around 1530) with John III Soyécourt, then in the early seventeenth century Ponthus of Belleforière. His grand-son, Charles-Maximilien de Belleforière, Soyécourt Marquis and Earl of Tilloloy was appointed in 1669 Chief Huntsman; it was he who built the castle in 1645. After the Seiglières which will overhaul by Boullée in 1752. The castle became property of the family of Hinnisdal after the Revolution. Count Henry of Hinnisdal (1841-1922) restored the castle in the 1880s by the Duthoit brothers.Burned and repeatedly bombed during World War I, there remained in 1918 the castle that sections of walls. He was the subject of a careful restoration on the initiative of the Countess Teresa of Hinnisdal (1878-1959) by the architect Amount early 1930. The latter raised the castle identically, by reusing the maximum the elements of the old castle rescued from the rubble. The countess died childless and the castle returned to his second niece, the Marquise Andigné, whose daughter now owns. The castle, the common buildings and three gates were classified historic monument March 4, 1994 and the moat, the French garden with its paths, vases and stone benches, the old gate of the Parisian hotel Hinnisdal and the main avenue (and groves) that connects the castle to the village of Laucourt.

How To Get To Château de Tilloloy (Map):