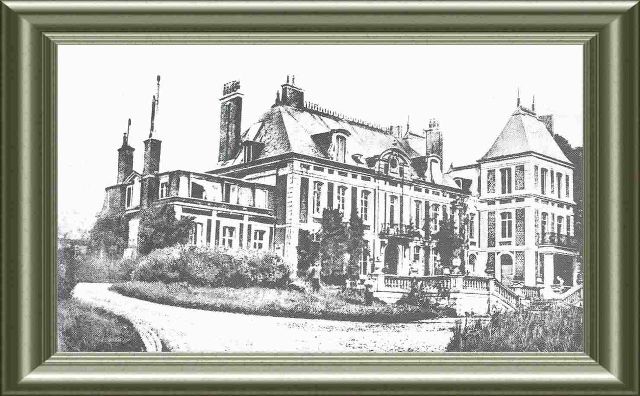 Location: Maissemy, in the Aisne departement of France (Picardie Region).
Built: 19th century.
Condition: --
Ownership / Access: Private property.
Notes: Château de Vadancourt is located in the hamlet of Vadancourt in the town of Maissemy, in Aisne, near Saint-Quentin.Guy Félix de Pardieu, Earl, Lord of Vadancourt1 of Bray-Saint-Christophe and Bracheux was part of the list of the States General of 1789, while the town of Saint-Quentin was represented by Father Marolles. The original castle was built overlooking the river Omignon, which rises to Pontru, and flows 30 km further in the Somme in Saint-Christ-Briost. Originally it included a terrace with an impressive staircase with balusters. It consisted of a high pavilion of three levels with park side balcony and rear wing adjoining the house. It showed a central front part of a span with an arched door on the ground floor, a balcony opening onto the first floor window, all topped by an attic crowned with a curved pediment pierced an oculus. In 1917 during the First World War, dilapidated, subject to the German bombing, was destroyed. At this time, the Z.A.B. (Zivilarbeiterbataillons) detachment civilian workers, were created around November 1916 due to stubborn summoned workers. The castle, requisitioned, was the site of the 1st Co. of ZAB 24, 500 and recalcitrant prisoners were locked up in the dilapidated castle, under the command of Lieutenant Wetzel. The region has suffered enormous damage, because the village has witnessed the biggest fights and remembers the bravery of English. Today it belongs to the family Houssin, who operates cottages.

How To Get To Château de Vadancourt (Map):