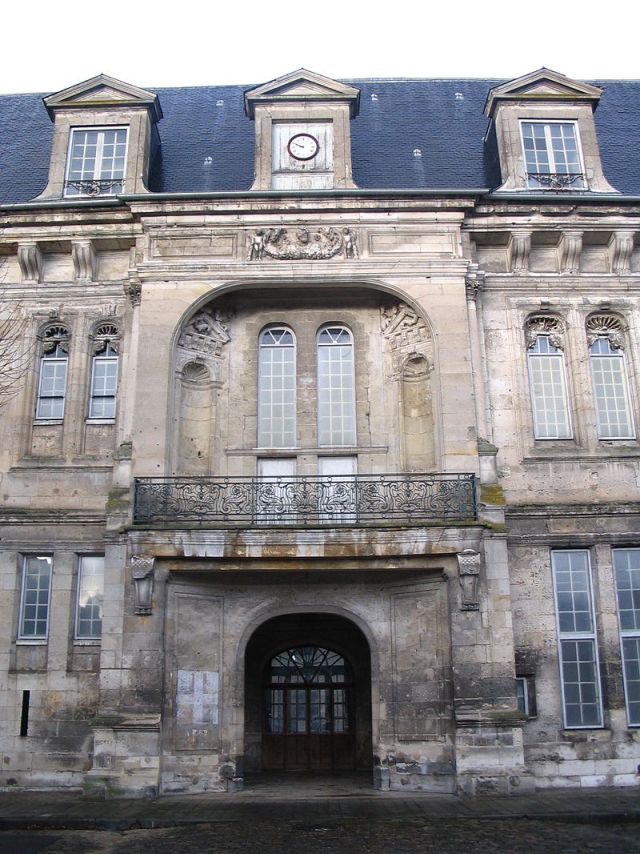 Location: Villers-Cotterêts, in the Aisne departement of France (Picardie Region).
Built: 1530-1556.
Condition: In good condition.
Ownership / Access: State property.
ISMH Reference Number: PA00115984
Notes: Château de Villers-Cotterêts is a castle located in Villers-Cotterets, in France.The monument is classified as historical monuments in 1997. It is the state property.In 1528, after Madrid return from captivity, Francis I decided to stay mainly in Paris and the Ile-de-France. Among the sites where the king intends to reside is that of Villers-Cotterets, it has since 1498, and which seduces with its game-filled forest. The construction of a royal residence is decided between 1528 and 1532 and entrusted to the Parisian master masons Jacques and Guillaume Lebreton (master mason). In Villers-Cotterets, as Saint-Germain-en-Laye and Fontainebleau, remained a few main building, walls and foundations of a medieval castle ruined by the Hundred Years War, which will be developed and integrated into the new buildings of where a certain asymmetry in the plane of the Royal house. The construction, funded by sales of wood, approximately covers the reigns of Francis I and Henry II, but knows its faster pace between 1532 and 1540. At that time, the main buildings are completed and it is in the course of a long stay that Francis I sign in August 1539, called the Ordinance of Villers-Cotterets. It now enters the castle by the court Uffizi via a passage whose brick vault is compartmentalized by stone ribs resting on consoles decorated with angel heads and foliage. Although quite remodeled over the centuries, the castle has retained its original plan. The courtyard is flanked by two long wings, common old. In the background lies the royal house whose façade presents a major innovation at the time of its construction, with the use of two superimposed orders: Ionic columns topped with Corinthian columns supporting a sequence of feuillagées consoles and a paved loggia whose niches were, originally, shelter statues. Above the loggia is a portrait of Francis with the Grand Collar of the Order of Saint Michael. Long and narrow mullioned windows crowned with shells backed by Love figurines complement the architecture of the pure Renaissance style facade. An archway, carved coffered, provides access to the Jeu de Paume court framed the royal apartments. A big right staircase leads upstairs and the royal chapel. It is covered with a sloping arch, basket handle, decorated with three rows of boxes carved salamanders, foliage and crowned with lilies, heads of cherubs or foliage ... One enters today in the chapel by a corridor created between 1762 and 1768. It has retained a beautiful high relief frieze, composed of regular sequences of three panels, which runs around the room: Royal crown with three flowers lily and the collar of the Order of Saint Michael surmounted by the imperial crown, adjoined salamanders and F foliage or lilies crowned framed salamander crowned themselves. Four columns, two angles, split each of the side walls into three unequal spans while an altarpiece occupies the eastern wall: on top of a high pedestal stands a Doric ornate dominated a second level ionic order. The decoration of the chapel has an undeniable Italian influence: garlands, ribbons, putti, winged heads bucrania leaves heads, cornucopias, grenades ... Leaving the chapel, we find, right, the small right staircase or staircase of Roy. Its vault is adorned with caissons decorated with scenes inspired by mythology: Hercules slaying the Nemean lion, Venus disarming love or musical duel of Apollo and Marsyas ... Walking around the castle from the outside, note the west gable of the pavilion of the Auditorium, decorated initials of Henri II and Catherine de Medici (HK) and interlaced crescents, chimneys of the house (F, salamander and lily) and cylindrical turrets north and east sides of the house.