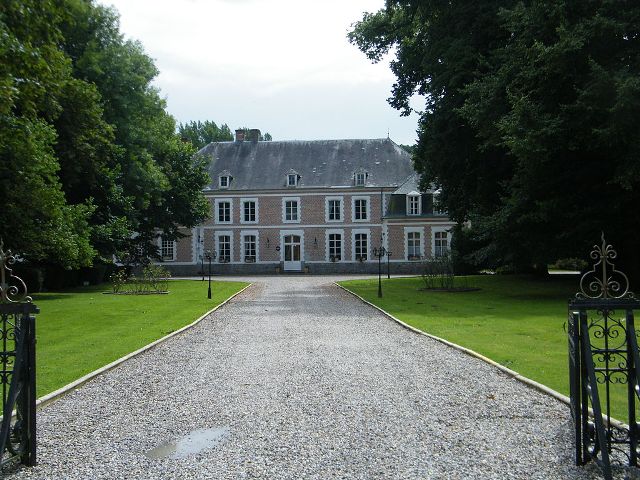 Location: Rue, in the Somme departement of France (Picardie Region).
Built: 1714.
Condition: In good condition.
Ownership / Access: Privately owned.
ISMH Reference Number: PA00116235
Notes: Château du Broutel its lake and its park are located in the town of Street, in the department of the Somme. Elements protected historical monument: the facades and roofs; the living room decorated with murals; the Louis XV room decorated with paintings of the eighteenth century frescoes; the floor of the old garden and the avenue of trees leading to the castle: registration by order of 12 September 1969.By application of the Treaty of Aix-la-Chapelle, the demolition of the citadel of Street took place shortly after 1668. The recovered materials were used in the construction of the building in brick and stone. Dating from before 1714, the building was raised on about 16 hectares. It was intended to Jean-Baptiste Loisel, a leading cavalry officers of Louis XIV, who died before completion. Jean Loisel The Left, owner of the castle, a pupil of Joseph Vernet, decorated himself frescoed salon and painted around 1760 large panels that decorate the living room of the Castle of Arry. The building was restored in 1824, after some damage to the Revolution, especially the roof. The second German army established its regional headquarters during the Second World War. The inscriptions on the stone edge of some windows (swastika, among others) testify to the German occupation. The castle was bought in the late 1960s by Lionel Leroy (former director and son of the founder of the Leroy Merlin institutions) who wanted to make his private residence in the country. The valuation of the castle and its current maintenance status back to this time. In the 1990s, the building was converted into a hotel and the impressive stables of the eighteenth century were the subject of renovation. At the end of the twentieth century, the castle was sold to a British company, Globebrow, who continued the work on the outbuildings and the surrounding area.The castle and its stables are in a wooded park of seven hectares surrounding a private lake.

How To Get To Château du Broutel (Map):