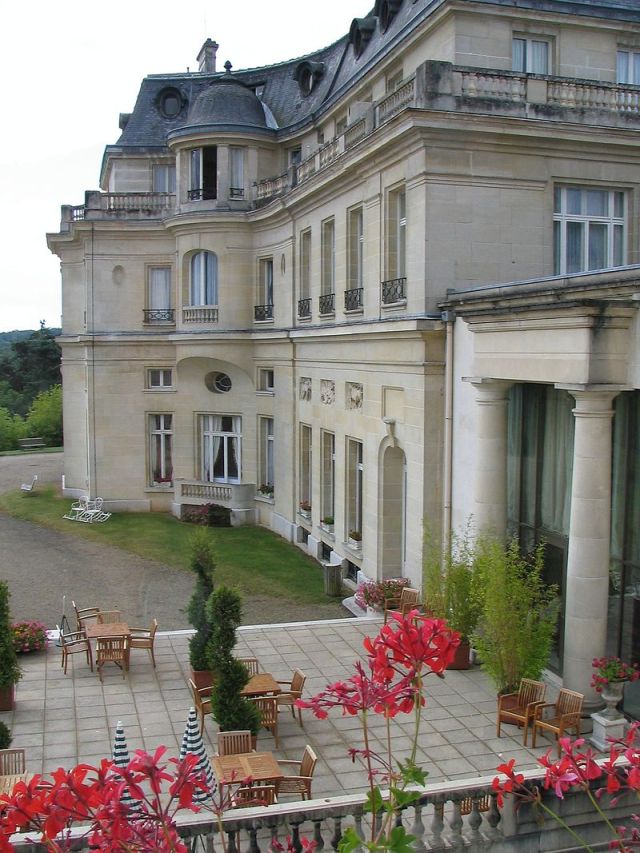 Location: La Chapelle-en-Serval, in the Oise departement of France (Picardie Region).
Built: 1907-1911.
Condition: In good condition.
Ownership / Access: Tiara Hotels & Resorts.
Notes: Château Mont-Royal is a castle built near La Chapelle-en-Serval (Oise) on the RD 118, southeast of Chantilly, by the architect Guillaume Tronchet on behalf of the composer Fernand Halphen.Fernand Halphen chose for his new castle a mound within the "warren of La Chapelle" forest in the domain of the "old castle" near the church, his father Georges Halphen had already acquired in 1882. After rejecting the project Anglo-Norman style of the architect René Sergent, and a first draft of medieval style (drawings Musée d'Orsay), Sponsor fixed his choice on the second draft of Guillaume Tronchet: a Louis XVI style castle celebrating hunting outdoors and music inside. Construction ranges from 1908 to 1911. The plan of the castle is quite complex. The entrance is in the corner between two oblique wings under a portico formed by Tuscan columns. The main façade extends to the rear and is powered by a front building in hemicycle, whose position is off. Entire second floor is built back behind a stone balustrade, forming a gallery allowing the discovery of the forest surrounding landscape. On facades, reliefs due to Georges Gardet celebrate the pleasures of hunting. The interior includes a theater, replica of the Opera Comique, now used by the hotel restaurant. The interior decor is the work of Georges Gardet. Fernand Halphen could not enjoy it long, because he was mobilized in 1914 and fell in 1917 in the First World War. His widow Alice Koenigswarter (1878-1963) then created the Halphen Foundation to help students of musical composition from the Conservatory by performing their works. During World War II, the castle was empty of furniture and vandalized. In 1989, J.P. Hermier buys the descendants of Fernand Halphen and transforms the hotel, which opened in 1990. In June 1992, the Concorde Hotels Group acquires all the property. The hotel has one hundred to nine rooms, including five suites, a restaurant and an indoor pool.