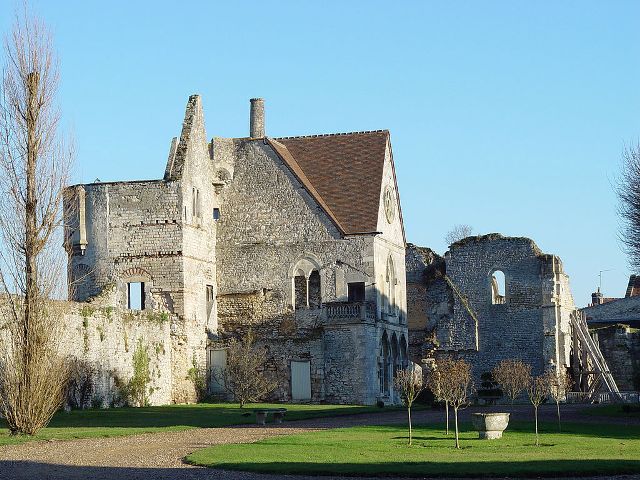 Location: Senlis, in the Oise departement of France (Picardie Region).
Built: 12th-18th century.
Condition: Ruins.
Ownership / Access: Privately owned.
ISMH Reference Number: PA00114885
Notes: Château royal de Senlis et prieuré Saint-Maurice dates back to the Merovingian and was the place of Hugh Capet's election in 987, but was completely rebuilt under Louis le Gros to 1130. It is used as a royal residence until the early sixteenth century and collapses shortly before the Revolution, and the surviving buildings are mostly demolished in 1812 and 1861. the priory Saint-Maurice is a foundation of St. Louis of 1262/1264 about and was built near the royal castle . Due to the insufficient number of monks, he was removed in 1768, and the cloister and the chapel were demolished after the Revolution. In the building are monks, today Municipal multipurpose room, and the house of the prior of the eighteenth century, bought by the town of Senlis in 1956 to house the Museum of Hunting. All the ruins of the royal castle and priory of Saint-Maurice is located on the same land, landscaped, and available free every day except Tuesday.The history is rich Senlis ten centuries of almost uninterrupted royal presence. The city was the seat of a castle or a palace Merovingian and Carolingian early Middle Ages, disappeared without some archaeological evidence, but mentioned in a number of acts and old documents. It could be a palace from the transformation of the courtroom top Roman Empire, who had to find the location of the current ruins since it is the highest point of Senlis. The royal treasure is preserved in 854. Charles the Bald y keeps his daughter Judith, a widow for the second time in 860 under the protection "paternal and royal and episcopal custody" before it was voluntarily removed by Baldwin I of Flanders. From 862, Senlis became the center of resistance against the Vikings. Charles locks locks the royal castle brother Pepin II of Aquitaine, deposed king, from 864, and his son Hincmar bishop of Laon from 870. Charles the Bald was also the first king whose frequent stay in Senlis no doubt, since he has dated many charters Senlis.