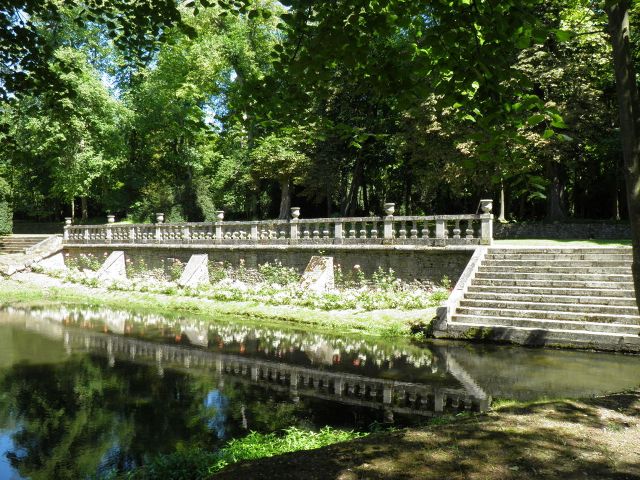 Location: Senlis, in the Oise departement of France (Picardie Region).
Built: 18th century.
Condition: In good condition.
Ownership / Access: Privately owned.
ISMH Reference Number: PA00114886
Notes: Domaine de Valgenceuse is a park located in the municipality of Senlis in the department of Oise, on the banks of the Nonette. Arranged from the seventeenth century, it includes a castle dating from the late eighteenth century.One of the earliest mentions of the area dates back to 1396, when it was bought by the Dean of the Chapter of St. Frambourg Senlis. This chapter donates to his death. This chapter sold it in 1582 to the Breguet family then the family Brillot. In 1620, the estate goes to Jean Hook was succeeded his son Louis Crochet, advisor of princes of Condé and archdeacon in Senlis. It is they who draw the first park and dig the pond in the bed of the Nonette. A Lebel, recipient domains, acquired the estate in 1656 and completes these facilities. He then build a now demolished castle. The owners succeed until the nineteenth century by women. At the end of the eighteenth century, the castle was rebuilt in neo-classical style, although its architecture resembles the style "Directoire" of the early nineteenth century. Regular garden is then transformed into landscaped park near the castle, the grove of the seventeenth century are preserved, complete factories. During the nineteenth century, Louise-of Junquières Celina (1806-1875), became Marquise de Giac by marriage, held a literary salon in the castle and the park: she receives Alfred de Vigny, Nerval, admirer who cites in his writings, and Alexandre Dumas and Alexandre Dumas son. The latter take place in the field its new Césarine. The orangery is then used as theater. Since 1964, the eastern end of the park is cut by the construction of the A1 motorway.The oldest part of the castle consists of a regular garden grove crossed by paths of box dating from the seventeenth century and a water mirror dug parallel to the bed of the Nonette. A terrace in the form of a pier the transition between the two. The grove has several factories added the nineteenth century: a way colonnade of an ancient church of Senlis, basins column, icebox treated as an artificial ruin. The terrace, classified, has a balustrade, a goddess statue and stairs leading down to the water mirror. The surroundings of the neoclassical palace are treated like an English garden with orangery. There is also a small maze of boxwood and a vegetable garden. The castle consists of one main building topped with a central pediment. This façade is punctuated by niches containing Length or bust statues. Two small wings slightly differ from one side to the west side. This same façade features a large balustrade terrace connecting the two wings.