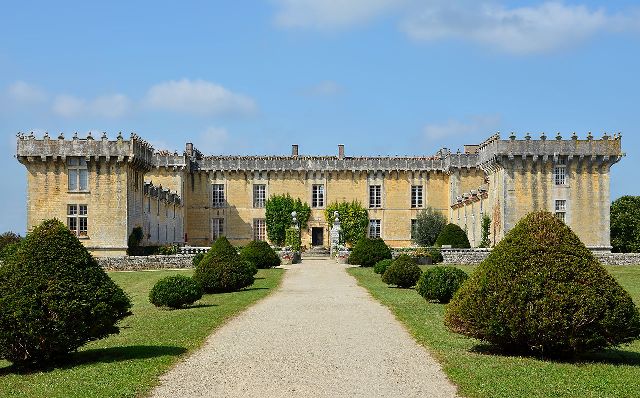 Location: Cherves-Richemont, in the Charente departement of France (Poitou-Charentes Region).
Built: 17th century.
Condition: In good condition.
Ownership / Access: Owned by a private company.
ISMH Reference Number: PA00104296
Notes: Château Chesnel (or Chateau Chenel on the IGN map) was built in 1610 by Charles-Roch Chesnel, on the heights of the antenna, in Cherves-Richemont (Charente). The Lordship of Cherves depended Cognac Cherves and land are purchased by Jacques Chesnel Cognac governor between 1530 and 1535. They then inhabited the small castle of Plumejeau, looted in 1569, in place of which was discovered the "treasure Cherves ". In 1610, Charles Roch Chesnel built the present castle surrounded by a moat, near Plumejeau on the field where Roche already amounted to a leak (dovecote) dated 1505, included in farm buildings behind buildings on the right, looking at the castle. Jean Frétard (1686-1765) married 1716 with Elisabeth Marie Chesnel (? -1759) And Louis Alexandre Frétard inherited the castle, which later became by marriage the property of Louis Guillouet, Comte d'Orvilliers. Later, it is passed to the counts of Roffignac. René Annibal Roffignac is famous for offering his head instead of that of Louis XVI. In 1800, one of his son, Louis-Philippe-Joseph Roffignac, is sent to Louisiana where he held the position of mayor of New Orleans. Ferdinand Count Roffignac is head of the wine estate Château Chesnel and founded his company in 1923; his son Jean and his grand-son Renaud succeeded him. Regular plan, it is the first variety of classic French style and has retained all of its original provisions. Historical Monument, it surprises with its original architecture makes it a unique monument in the region. The castle and its outbuildings have remained intact since their construction in the early seventeenth century. It consists of a large rectangular forecourt with three wings opening on the square of the castle, with a central courtyard and surrounded by a dry moat on four sides. The long facade is single level, tiled. It is flanked by two round towers at low conical roof. In the center the gate and pedestrian gate is topped with a large gatehouse with battlements and fancy jaggies. The castle consists of a main building with two levels of square windows with the middle steps and door, flanked by two pavilions or square towers above the low wings back. A parapet with fancy merlons surmounted by the crown balls. An arch spanning the moat and an openwork baluster parapet stones complete the symmetry. The castle can be visited from 15 June to 15 September or by appointment.

How To Get To Château Chesnel (Map):