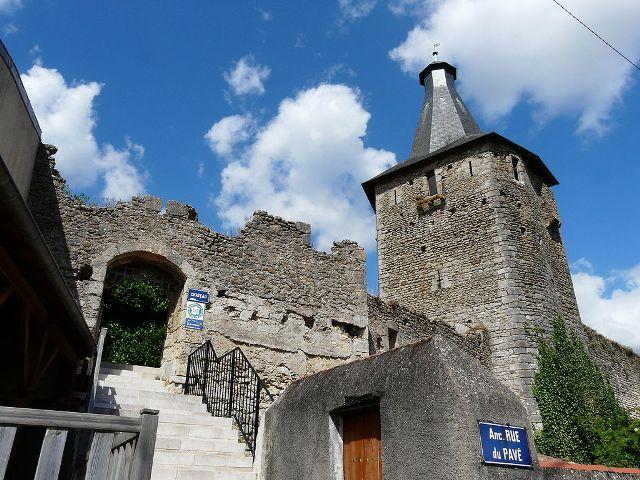 Location: Airvault, in the Deux-Sèvres departement of France (Poitou-Charentes Region).
Built: 11th century.
Condition: In good condition.
Ownership / Access: Privately owned.
ISMH Reference Number: PA00101166
Notes: Château d'Airvault is a medieval castle in the French town of Airvault in the Deux-Sèvres department in Aquitaine-Limousin-Poitou-Charentes region. The city of Airvault is spread out in the valley of Thouet around two monuments, the abbey and Saint-Pierre church, dominated by the citadel built on a hill. This strategic position in the Middle Ages was an important part of the powerful defense system of the city.Airvault Castle was built on an ancient castrum The castle was besieged and conquered in 1207 by Philippe Auguste. September 22, 1565, Jean Ysoré, baron of Airvault had the honor to welcome Charles IX and the little prince of Navarre (later Henry IV). On 3 October 1569, after the battle of Moncontour which saw the victory of the Duke of Anjou (the future Henry III), Gaspard de Coligny, who commanded the beaten Calvinists ordered to set fire to the castle to avenge Ysoré René (son of Jean Ysoré) which contributed to his defeat. Burned the castle was abandoned by his lords. In the early twentieth century the owner built housing in the backyard. The remains of the castle were listed historical monument October 3rd, 1929 and filed September 24, 2007 in respect of the enclosure and its towers, remains of the Barbican and soil.