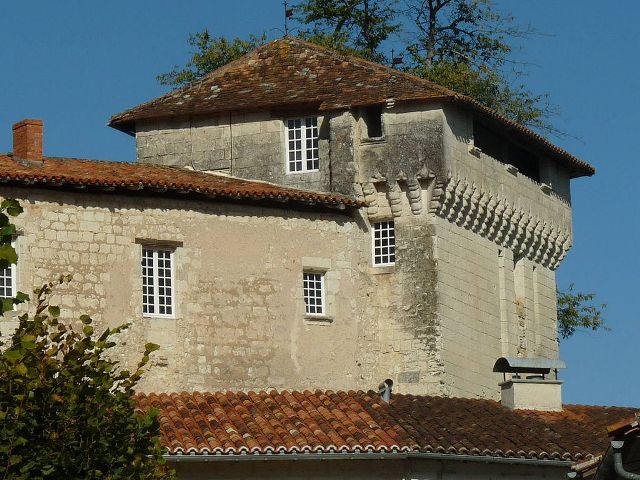 Location: Aubeterre-sur-Dronne, in the Charente departement of France (Poitou-Charentes Region).
Built: 11th century.
Condition: In good condition.
Ownership / Access: Privately owned.
ISMH Reference Number: PA00104233
Notes: Château d'Aubeterre in Charente was an important stronghold surrounded by the lower town, while the upper town was built around the abbey.The castle was built on the hill which had been dug in the monolithic church. He was surrounded by moats and fortified plazas that have disappeared. The first known Aubeterre lords are co-lords in 1004. Then at the end of the thirteenth century, the co-lords were Raymond and Vigier.During the Hundred Years War the castle was taken and retaken several times, the last in 1453 when François Bouchard, Baron Aubeterre reconstructs the manor and its brand vis-à-vis independence of the abbot and Aubeterre Count of Angouleme. The religious wars divided the family. Later, David Bouchard, Viscount of Aubeterre, returned to Catholicism, was a faithful kings Henry III and Henry IV. By his daughter, the castle passed to the Marshal of Aubeterre until 1628. Their descendants, by their quarrels, ended the prosperity of the place. In 1810, Knight returned to Aubeterre Bourbon-Conti that destroyed the dismembered and sold. Mrs. Moulinier will buy the ruins and try to save them. Then all remains will still be sold several times. The gate, the house, the Renaissance chapel and the remains of the enclosure and the Saint-Jean tower were registered historic monument on 1 March 1973.