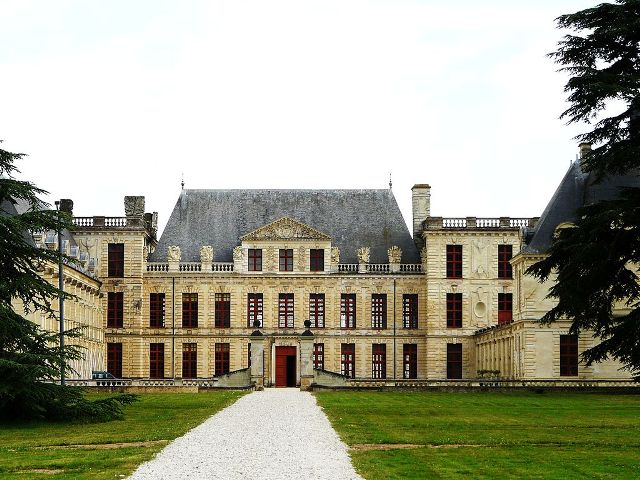 Location: Oiron, in the Deux-Sèvres departement of France (Poitou-Charentes Region).
Built: 15th century.
Condition: In good condition.
Ownership / Access: State property.
ISMH Reference Number: PA00101294
Notes: Château d'Oiron is located in Oiron in the Deux-Sèvres department in France. The castle, with its courtyard, its gates, the small park and the immediately adjoining land, the subject of a classification as historical monuments since October 2, 1923. This protection is then completed: all parcels in the field of view of the castle is the subject of a registration as a historic monument since July 17, 1943.Oiron Castle is the work of the Gouffier family: William (died in 1495) is Charles VII earth Oiron in 1449. By his second marriage with Philip de Montmorency, could have come to some portraits of this Oiron family. His son Artus Gouffier Boissy, governor of Francis I, was appointed Grand Master of France in 1515 and Duke of Roannez and peer of France; accompanying Charles VIII and Louis XII in Italy where he received the land Caravaz - title became Marquis of Carabas in Puss in Boots by Charles Perrault - he became interested in the art of this country and could truly begin important collection 'family art. His brother Adrian, cardinal and legate had received Raphael Little Holy Family (Louvre) and his wife, Helene de Hangest, would have constituted an important collection of drawings, some perhaps from his hand. His third brother, William, Admiral of France, was the builder of the castle Bonnivet Poitevin (86 - destroyed), one of the most beautiful residences of the French Renaissance. With their son Claude Gouffier becomes Grand Squire of France in 1546, the family reached its peak. The courtyard was decorated with a large metal equestrian statue of King Henri II "victory, holding a palm in hand" according to an inventory from 1559 transcribed by its famous owner (?) - And controversial - Vendée Benjamin Fillon ( 1819-1881), and a marble basin attributed to the Italian Just John II (1510-around 1577) used clam in the former collegiate (parish church of Saint-Maurice from 1801); a marble mortar from the castle is preserved at the Museum of Agesci in Niort (cf. Daniel Courant, sculptors Dictionary of Deux-Sèvres Geste editions, 2012, pp 350 and 351). Moreover Thirty-four busts of Roman emperors or kings profile of France decorate the window sills on three sides; only remain those of the facade of the Renaissance gallery. Between 1620 and 1642 Louis Gouffier erected King flag, rebuild the house of the body and perform different painted ceilings and murals, including en Amazons adorned with fifteen paintings "in large characters" (disappeared), interior decoration works assigned by Vouhé Despied to Jacques and Charles Beaubrun (cited with his brother Henri, Henri Clouzot) (supra, p. 26..) - to which the Duke had ordered seven tables on 04.03.1629 for the room the King's apartment - which combine the 09/25/1630 for paint work to make it; Despied qualified glazier, then go brown frames at Castle Thouars property of the Dukes of La Tremoille.At the castle she did ask dated chimneys his arms cooker 1700 (some conserved) and faience tiles from Nevers to blue monochrome white background which he remained six boxes at his death, and it did ask ceiling compartment floors , doors and paneling which a firm is "wooded" natural oak (a master carpenter marries Thouars Oiron in August 1688); the chapel of the hospice for receiving hundred poor, was blessed on 26/07/1705. In January 1708 and January 1713 his son was transporting furniture in his castle Bellegarde, her primary residence; some furniture bearing the arms of Rochechouart are reported to the local hospital by an anonymous author of the late nineteenth century.

How To Get To Château d'Oiron (Map):