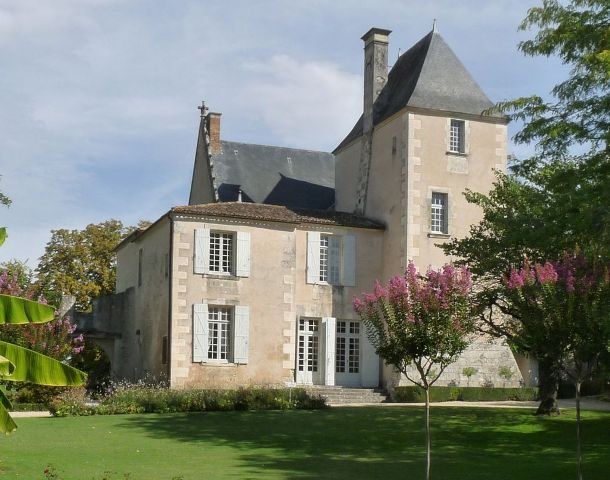 Location: Saint-Dizant-du-Gua, in the Charente-Maritime departement of France (Poitou-Charentes Region).
Built: 16th-18th century.
Condition: In good condition.
Ownership / Access: Privately owned.
ISMH Reference Number: PA00105170
Notes: Château de Beaulon is a castle located in the municipality of Saint-Dizant-du-Gua in the department of Charente-Maritime in France. It is surrounded by vineyards producing Pineau and cognac and is known for its blue Fontaines. It is located about 30 km south of the city of Royan, in the village of Saint-Dizant along the D.145, tourist route in Blaye Royan and Bordeaux.It's 1480 (end of the reign of Louis XI) that the family of Vinsons built the castle which will take the name of Beaulon in 1510, when the lordship of Saint-Dizant is acquired by the family of Beaulon in 1502, or a little before. After a fire in 1510, the castle was rebuilt by Jacques de Beaulon in its western part in the Renaissance3 style. In 1591, the land was seized by the Jesuits in Bordeaux for non-payment of rent despite the intervention of Henry IV. In the early seventeenth century, Monsignor Nesmond, bishop of Bayeux and adviser to Louis XIV, the inheritance becomes lord of Beaulon (Family Nesmond will own until 1712) and the right of high justice is given to the lordship in 1635. He was in the seventeenth century, the summer residence of the Bishops of Bordeaux. Subsequently, marriage, Castle Beaulon will, after the family Nesmond, the property of the families of Bigot de Bremond d'Ars, Porte. In 1965, Castle Beaulon becomes the property of Christian Thomas. Since this year it acquired the property, major renovations were carried out both in the buildings of the development and beautification of vineyards. Registered historic building in 1987 thanks to the tenacity of its owner, after five centuries of existence, the family estate for over forty years, welcomes visitors.

How To Get To Château de Beaulon (Map):