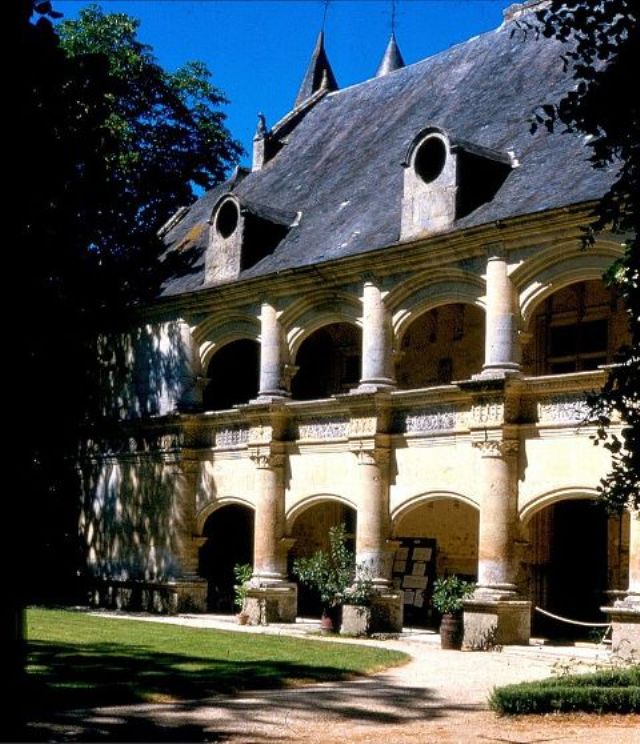 Location: Dampierre-sur-Boutonne, in the Charente-Maritime departement of France (Poitou-Charentes Region).
Built: 15th centurty.
Condition: In good condition.
Ownership / Access: Privately owned.
ISMH Reference Number: PA00104667
Notes: Château de Dampierre-sur-Boutonne is located in the small village of Dampierre-sur-Boutonne Charente-Maritime. It is the subject of a classification as historical monuments since 18 May 1926 and registered 21 September 1990.In 995, on the tops of Dampierre was the Chatel Gaillard which Adalbert was the Lord. The original castle and the castle were on the mound where the twentieth century Romanesque church. In 1027, Petronilla, daughter of Adalbert, dowry the lordship of Dampierre Hugues Maingot, from a powerful family of Surgères. In 1342, the death of the last Maingot childless, Dampierre returned to his sister Jeanne, widow of Jean Larchevêque, lord of Parthenay, remarried Aymard de Clermont, the Counts of Clermont-Tonnerre. This family will retain the castle until 1598. In 1373, Du Guesclin hard fortress to the English Plantagenet. In 1495, the barony of Dampierre is separated from that of Surgères; François Clermont, back from the wars of Italy, began construction of the Renaissance castle on two islands in the Boutonne, which was completed around 1475. His grand-son Claude, first gentleman of the King's Chamber, married Jeanne de Vivonne, Seneschal of Poitou daughter, governor of the Dauphin, and disgraced, died in 1545. His daughter Claude, Baroness de Retz, her second husband in 1565 in Cognac Albert de Gondi, first gentleman of the House of Charles IX of France, governor of Metz, ambassador, Marshal of France, Duke and peer, changed to 1545-1550 the castle by adding galleries superimposed "to the Italian" renaissance jewel. In winter 1539, Francis I - born in Cognac - lay there after a hunt in the forest of Chize. On the night of 22 January 1586, the castle was besieged by the Protestants but saved by the arrival of Governor Malicorne, who hanged the attackers. May 4, 1587, it is taken by Condé and plundered to avenge the destruction of the castle Marcoussis property of Conde's wife, by Gondi.

How To Get To Château de Dampierre-sur-Boutonne (Map):