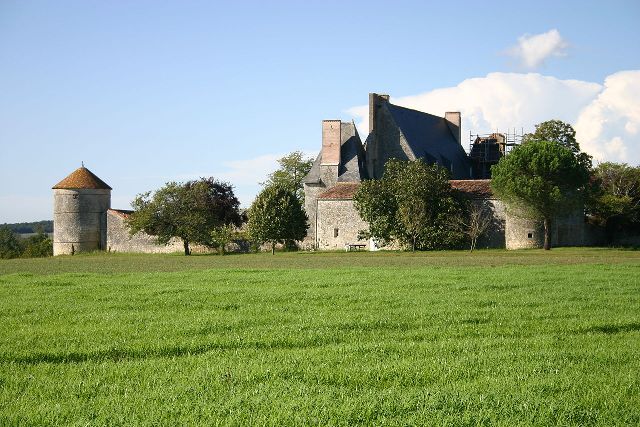 Location: Geay, in the Charente-Maritime departement of France (Poitou-Charentes Region).
Built: 16th century.
Condition: In good condition.
Ownership / Access: Privately owned.
ISMH Reference Number: PA00104695
Notes: Château de Geay, dating from the late sixteenth century, is located near the town of Geay Charente-Maritime. The castle was built by John Latour Geay to 1591 to replace the previous home of the family that was difficult to defend because situated in the town center. In the context of the end of the religious wars, the Lord of Geay had indeed received his suzerain, the lady of Tonnay-Charente, authorization to fortify this area was the family's possession since at least 1490. Thus the castle was provided with a wall, bretèches and archers. The castle, which has seen twenty generations, is still in the hands of the family that has erected. It is a listed building since 1986. This rectangular castle surrounded by two square pavilions is distinguished by its high slate roof. It is surrounded by a wall that originally had a tower at each corner, of which only two remain today. The entire construction demonstrated sobriety except for the front door, remarkable for its pilasters and triangular pediment. The castle, private property, do not usually visit.