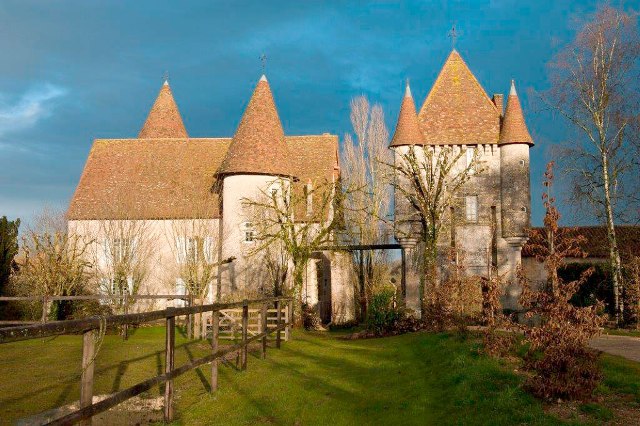 Location: Pleuville, in the Charente departement of France (Poitou-Charentes Region).
Built: 15th century.
Condition: In good condition.
Ownership / Access: Owned by a private company.
ISMH Reference Number: PA16000025
Notes: Château de Gorce is located along the Transon in Pleuville Confolentais in the Charente. The existence of family FONTLEBON is attested by donations since 1160 but in 1473 cen'est a text quotes Antoine de FONTLEBON as Lord of Gorce.Le stronghold through succession to Jean that the Asnière sells life to Jacques du Verrier Boulzat in 1787 that will not migrate. Castle Gorce was sold several times in the twentieth century. It was listed as a historic monument on 14 October 2002. The ruins of the circular tower which was the original castle still near the pond. Gorce Castle current date of the late Middle Ages. The buildings form a U compound gatehouse that communicates with the home by a flying bridge and a common building and attached to both sides of an open courtyard common with the south wing confined at the ends of a square-section tower. The dungeon, crowned machicoulis is flanked by corbelled turrets. The grooves corresponding to the drawbridge are still visible as well as the home. The house is flanked by a round tower with a pepper shaker and a polygonal tower staircase. The door is adorned with Renaissance pilasters and lintel is marked with a perfectly preserved shield. Part common dates back to the seventeenth century with the date 1654 on a beam.

How To Get To Château de Gorce (Map):