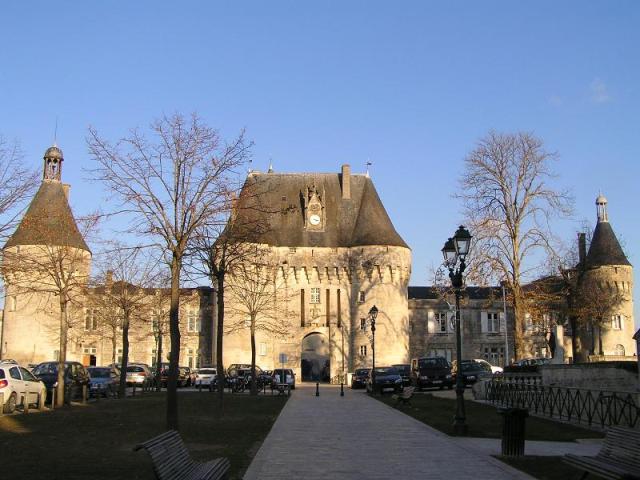 Location: Jonzac, in the Charente-Maritime departement of France (Poitou-Charentes Region).
Built: 17th-19th century.
Condition: In good condition.
Ownership / Access: Owned by the town.
ISMH Reference Number: PA00104777
Notes: Château de Jonzac is a castle located in the town of Jonzac in the department of Charente-Maritime in France. The castle, the gatehouse and towers, is the subject of a classification as historical monuments since May 3, 1913. The speaker is medieval and ditch carved into the rock, was filled in the nineteenth century. The imposing gatehouse is marked 1449 and dates from the sixteenth century, whose work is part of the northwest tower while the south-west tower, a smaller diameter, is the seventeenth century. The courtyard is surrounded by very reworked buildings; it has been regrooved to transform the half floor in ground floor, with destruction of external stairs leading to the main floor. The slate roofs are high on the towers pepper shakers, and a curious set two-sided connecting two pepper shakers for the gatehouse. The facade on the Seugne kept his aliasing, its corbelled turrets and balconies with balustrades. public building in which are housed the mayor and the sub-prefecture.

How To Get To Château de Jonzac (Map):