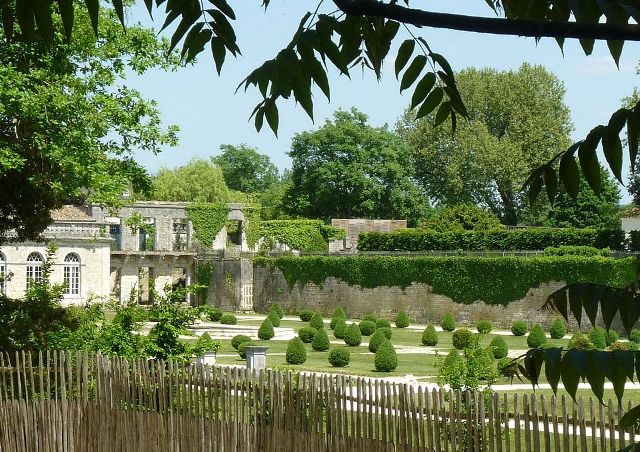 Location: Edon, in the Charente departement of France (Poitou-Charentes Region).
Built: 16th-19th century.
Condition: In good condition.
Ownership / Access: Privately owned.
ISMH Reference Number: PA00104558
Notes: Château de la Rochebeaucourt is a building located on Combiers common and Édon Charente, it is at the limit of the departments of Charente and Dordogne and faces the town of La Rochebeaucourt-et-Argentine located Dordogne. Following a fire on February 5, 1941, it remains today the Monumental foundations on which was built the castle and the Orangerie building. Four buildings have followed, the last two castles (the sixteenth to the twentieth century) were built on a rocky promontory (against which the bases are backed) on the right bank of the Lizonne and overlooking the confluence of a small stream down Rougnac the Manore. Lizonne The fact of the department between Charente and Dordogne, and the village of La Rochebeaucourt is located on the opposite bank. It was one of the largest castles of Charente. In May-June 1792, while the castle furniture is sold at the request of Mr Cousin on behalf of a minor, the mansion is described by the manager Boulland "one of the most consistent in form and extent .. . flanked by two towers, one topped with battlements, full slated (...) 12 large and small rooms on each floor, 9 lights and two towers called dungeons have a high room with a beautiful chapel the first and most beautiful stairs we can see (...) last building was built a body of six bass parts in chimneys. " This castle rebuilt in the Renaissance style under the Second Empire, as evidenced by the mural of "passing cars" under the terrace leading down to cover and win the staircase leading to the castle, there are only ruins the basement on a plane L consisting of closed arches. A passage leading to rooms decorated with sculptures of the late sixteenth century. Ancient fountains, pipelines dégueuloirs and a pool frame the orangery. Alley in Green Park, planted in 1826 with plane trees alternating with Italian poplars, Ark Virtue is a triumphal arch built in 1840 by Alexander Leon Luce de Béarn, in memory of his wife, Mary Elizabeth Pauline Bouchet Sourches Tourzel (+ 1839); it is covered with inscriptions celebrating it, which were published in 1861 his memoirs forty years from 1789 to 1830 (reissued in 1868 by his son Horace). The landscaped gardens of plans drawn up in May 1861 by Rousseau, Bordeaux, appear not to have been made.