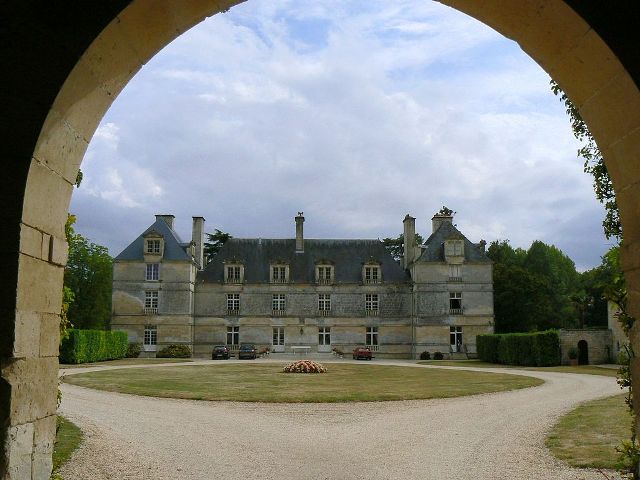 Location: Echiré, in the Deux-Sèvres departement of France (Poitou-Charentes Region).
Built: 17th century.
Condition: In good condition.
Ownership / Access: Privately owned.
ISMH Reference Number: PA00101228
Notes: Château de La Taillée is privately owned, listed building, it is located Échiré (9 km from Niort). The castle of Carved, built in stone in the style of Henri IV / Louis XIII, was built in one go, in the early seventeenth century. Three dates are set in stone: 1636, on the north side, in 1639 on the southern side of the porch, in 1642 on the west loft. It was built by the family of Fay of The Carved, specifically by the Joshua Fay, who married April 27, 1629 Préjente Magné. Their weapons are carved on the north side of the castle. Their son, Louis du Fay, lord of the Carved, married Dec. 9, 1683 Elizabeth Martel Vandré. This is the niece of Eleanor of Desmier Olbreuse which was nicknamed the grandmother of Europe. His daughter, Sophia Dorothea, wife of Georges-Louis Brunswick-Hanover who will ascend the throne under the name of George the First. George William of Fay, a marriage contract signed February 19, 1705 in the castle of the Durbelière, wife of Françoise Vergier of Rochejaquelein. Through his mother, born Elizabeth of Caumont Adde, she is the granddaughter of the poet Agrippa back Aubigné. During the Revolution, the Fay of The Carved emigrate. The castle is for sale as a national asset, but can not find a buyer. The rightful owners recover their return from emigration, and from generation to generation transmit to their descendants who still own it today.

How To Get To Château de La Taillée (Map):