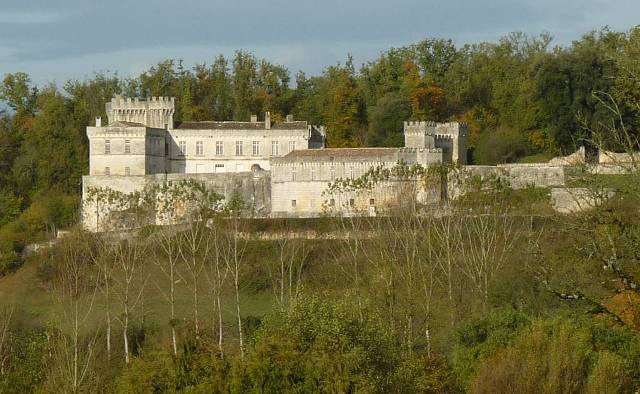 Location: Garat, in the Charente departement of France (Poitou-Charentes Region).
Built: 14th-17th century.
Condition: In good condition.
Ownership / Access: Privately owned.
ISMH Reference Number: PA00104373
Notes: Château de la Tranchade in Garat (Charente) Anguienne dominates the valley on a rocky outcrop, strategic location to protect the southeast of Angouleme access. The portal, which dates from 1598, is crenellated parapet on battlements adorned with shells. It is surrounded by square turrets to the same settings. After crossing the bridge over the moat, one reaches the courtyard dominated by the imposing square tower built in the late fourteenth century. The buildings form two wings bracket supported on the dungeon. The East Wing, the gate and the cellars were built in the sixteenth century and the north wing in the seventeenth century. These buildings were included in the nineteenth century. The castle was bought in 1929 and restored by Mr. Gates and his wife, the widow wife of Count Amédée Lorgevil. Their descendants have ensured the restoration of the site after the 1999 storm that heavily damaged the area and some buildings as had then found out Mrs. Trautman, Minister of Culture came on site several days later. August 4, 1970 the facade and roof of the castle are classified as historical monuments. The great room of Chivalry, rehabilitated, hosts receptions since 2003, and events since 2007.

How To Get To Château de la Tranchade (Map):