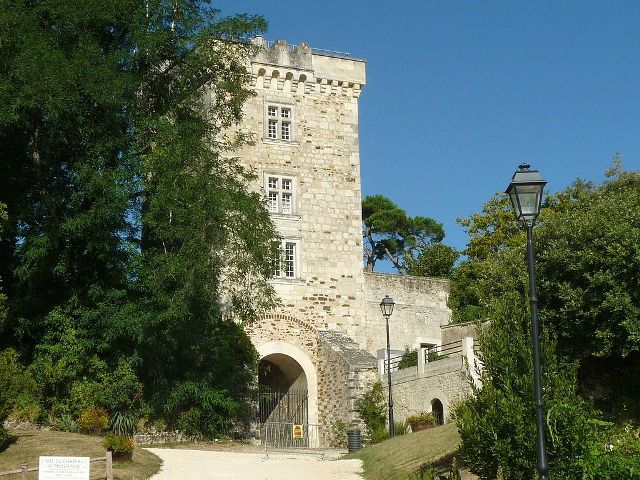 Location: Montendre, in the Charente-Maritime departement of France (Poitou-Charentes Region).
Built: 11th century.
Condition: In good condition.
Ownership / Access: --
Notes: Château de Montendre is located in the small town of Montendre in Charente-Maritime. All that remains of the medieval fortress that a high square tower with three floors (fifteenth century, rebuilt in the nineteenth), which formed the entrance to the courtyard, a round tower, underground and remains of fortifications. The square tower houses a museum dedicated to local traditions, the Museum of Art and Popular Traditions. In the center of the esplanade remain the ruins of a noble house, one floor and very simple appearance, said "Logis de La Rochefoucauld." Built in the eighteenth century at the request of Louis Marquis de La Rochefoucauld Fonseque, it originally included several rooms, two kitchens, an office, and many common including stables, a tack room, a barn, a pigsty, a wine cellar and a shed. Abandoned in the nineteenth century, it still appears in its entirety in the early twentieth century, but is finally destroyed, with the exception of a front pan with a molded door, which serves as a backdrop to the outdoor theater. Several buildings were also destroyed, including the "house of Féodistes" which adjoined the square tower and part of the underground has been filled for safety reasons. The castle grounds today is a popular promenade, where you can enjoy views of the city and the surrounding moors and woods. The outdoor theater, built in 1959, has 1200 seats; there gives performances and shows during the summer season.

How To Get To Château de Montendre (Map):