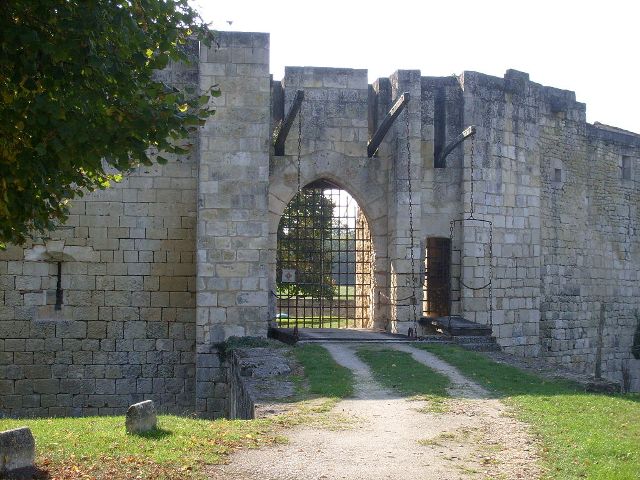 Location: Nieul-lès-Saintes, in the Charente-Maritime departement of France (Poitou-Charentes Region).
Built: 14th-17th century.
Condition: In good condition.
Ownership / Access: Privately owned.
ISMH Reference Number: PA00104826
Notes: Château de Nieul-lès-Saintes is located in Nieul-lès-Saintes, Charente-Maritime. Jeanne de Parthenay inherits the land of Nieul in 1370, and this is her husband, Jehan Chaudrier, an ancestor of Ronsard, who built this fortress. It is this same Jehan Chaudrier, mayor of La Rochelle, which is famous for having delivered the city of English through a ruse. In 1573 and 1574 Protestant worship is celebrated there. From 1630 there were many co-lords until 1720 when he returned to Gabriel Limousin. Then the castle was sold as national property in 1793. The castle is surrounded by a dry moat which were equipped with two drawbridges. It has an irregular polygonal enclosure walls with buttresses projecting on the corner of the curtain, which are reminiscent of the military architecture of the thirteenth century and fourteenth century. The curtains that are high over 12 meters were crowned with a walkway that is always present on the front of the two square towers. In the courtyard, common house and are backed by the wall. The three towers of stairs there are two, the third leading not only vaulted rooms in the basement. Its restoration is ongoing and it has been included in the supplementary inventory of historical monuments July 8, 1988.