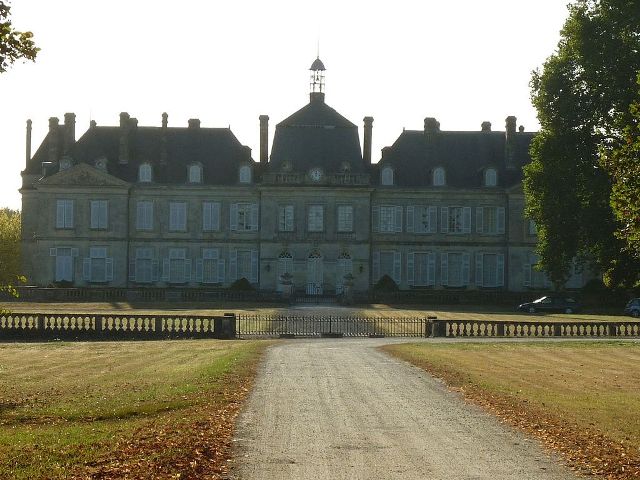 Location: Plassac, in the Charente-Maritime departement of France (Poitou-Charentes Region).
Built: 16th-18th century.
Condition: In good condition.
Ownership / Access: Owned by a private company.
ISMH Reference Number: PA00104839
Notes: Château de Plassac is located in the towns of Plassac and Saint-Genis-de-Saintonge in Charente-Maritime. The medieval castle was an irregular building, walls with buttresses on which were backed addictions; it was razed around 1769 except the door of the pilgrim who was the gatehouse, rectangular building with pilasters on figurative flaming pellets. Were also kept ditches with scarp and counterscarp. The forecourt bordered dependencies slate roof, is separated from the courtyard by a balustrade. The two wings and four pavilions built by the Duke of Epernon were also leveled. The castle of the eighteenth century has a high horn broken flanked by two wings each finished attic by an advanced triangular pediment. Roofing, very high, covered with slates are pierced by skylights small rounded pediment. The courtyard is flanked by the stables of the eighteenth century and common in the nineteenth century. The castle boasts many historical monuments protection: registration November 6, 2003, a ranking for the entire castle June 9, 2008 and registration for the Court of Common that same June 9, 2008. The park is enclosed by walls flanked by four round towers and pierced by three doors. The driveway, the garden, the wall, and the park and its paths, its plantations and its pool are registered historical monument, walls, towers, factories are classified. Everything is pre-registered inventory of remarkable gardens.